Let’s be honest, there are sets for every tastes and we cannot all enjoy the same things but I think that you have to be a real ultra agents fan to achieve this set. It seems a mix of superheroes and legends of Chima with plenty of great colors schemes, it’s true, but without anything that really captivates the interest, unless you put aside of another similar elements.

The lab is constituted by two similar parts, built with grey and white bricks and a sort of robot with remote safety claws for Astor City and all his experimental tasks. The action begins when Toxikita and Retox try to blow the secret lab with the precious help of the heli’s weapons, finding at same time some resistance from the professor and the super agent. For that, the lab brings a couple of flick fire-missiles and a single stud shooter. 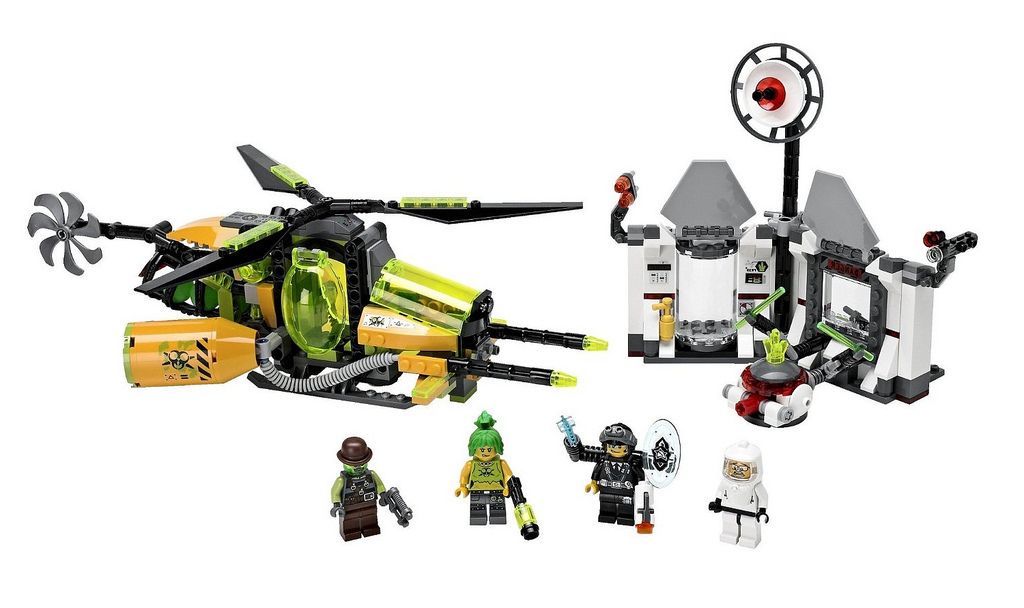 The heli seems more powerful with to toxic cannons at the front, fed by two tanks at the back, a toxic bomb dropper that includes three bombs and an additional chain, just in case that the other two aren’t enough. In terms of design it couldn’t be stranger, remembering galaxy squad or even legends of chima’s vehicles.

The landing gear seems to use known pieces, however I guess that’s the only part that is similar. The front is constituted by the long toxic cannons at the front, the cockpit next to it, filled with three yellow translucent pieces, the propeller just on top and the back, there is space for the three bombers deposit.

Globally, I might be unfair, but honestly this isn’t one of my favorites for sure, despite all its interesting features. The mini-figures look pretty nice and some of them such as the scientist look pretty rare but just as the price, around fifty dollars, they aren’t enough to convince me!