Lavertus Outland Base is another great Chima’s set that looks absolutely amazing! I must say that the Lion’s tribe has been quite lucky because not even a year has passed since the big Chi Temple (70010) has been release and the guys have already another big fortress to fight back the enemy.

This huge set brings exactly six hundred and eighty four pieces and features the symmetric Outland Base, two vehicles (a nice yellow speeder for the lions and unusual battle car for the spiders), four mini-figures (Lavertus and Laval from the Lions, Blista from the Bats and Sparratus from the Spiders) and a bunch of nice accessories to play with, namely some really nice weapons for the figures.

The Base, built with a really nice color scheme where the yellow stands out, presents a symmetric structure with a big gate in the middle and a ramp for the yellow spider. As you can see through the pictures, these parts easily open and close and can be controlled through a Knob placed at the side of the structure.

Just at the front, next to the gate, a couple of long yellow bricks seem to move up and down triggered once again by another knob placed just next to it. The details are definitely huge and just above, a small platform on a higher level has more than enough space not only for the lions but also for a couple of towers with plenty of lights and weapons (one of them even looks like a communication antenna). 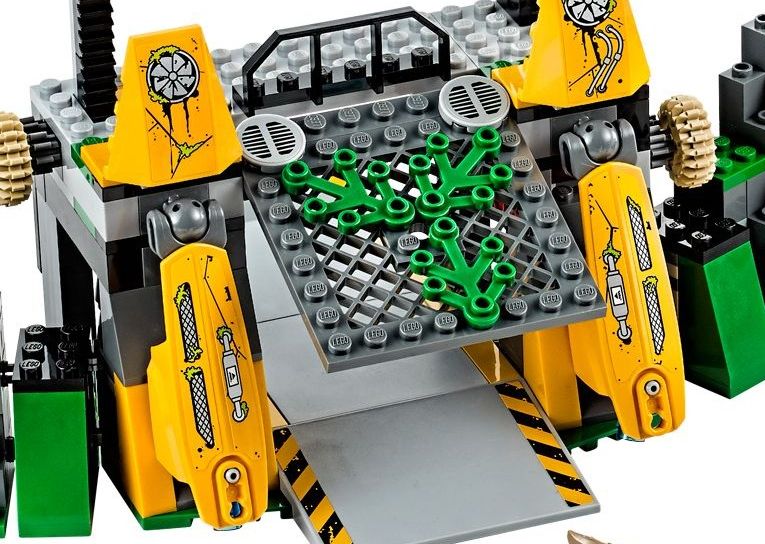 Both sides of the Outland base have the same elements, however on the edges there are some really nice differences, namely in terms of weapons. On the left, a big laser gun with four blue rays not only moves in all directions but also rotates with a great mechanism (you can see the big handlers at the right side) which is absolutely huge in terms of playability. On the opposite side the fun continues, this time with a smaller laser gun. Both walls, built over a green plate, look really nice, alternating many little grey rocks with a few green bushes and at the edges a round yellow tower support all the weapons’ structure. 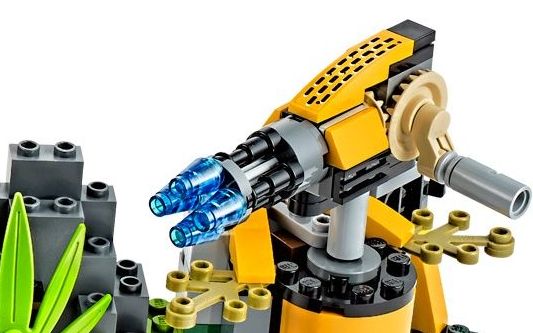 Having a look at the vehicles, the yellow speeder bike is quite long and presents a couple of fat wheels stuck to the chassis through some little technic pieces. In the middle, a small seat with a control panel looks more than enough, for the lion, to maneuver skillfully the bike and defeat the spiders.

Talking about these, Sparatus will fight the Lions with a really nice black car filled with a bunch of nice details. Staring for instance by the cockpit, it has a great seat for the spider with a couple of detailed controls, one on each side. The wheels axes are completely different from each other, having at the back some really unusual crawlers made with a rubber element. Made mostly with dark bricks, this vehicle has, besides of a bunch of different claws, a powerful rotating weapon with a double green laser. 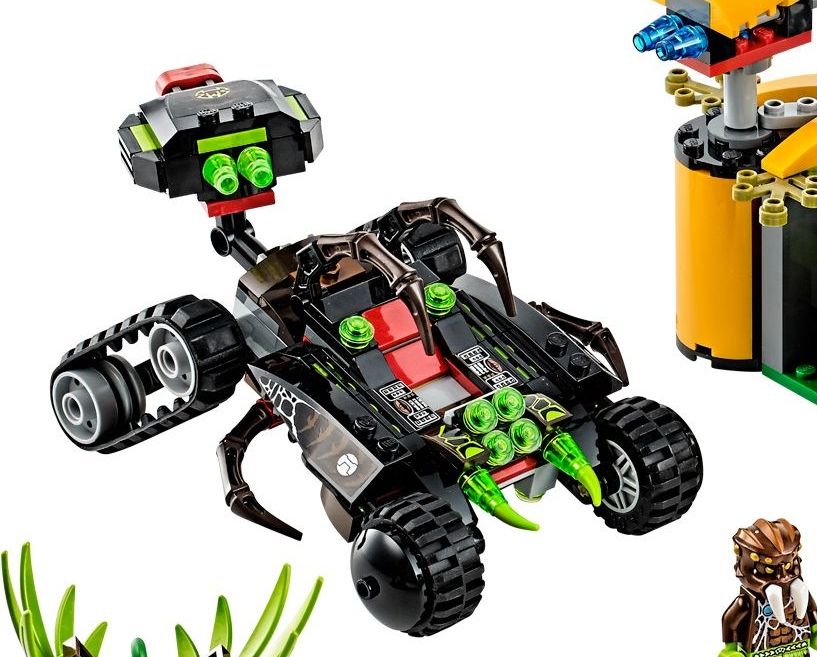 Prepare your wallet but I think that it will worth it. The most probable seventy dollars that it will cost seem fair not only if we look at the seven hundred bricks that the set brings but most of all the bunch of things that it features in terms of beauty and playability. The four mini-figures look once again really nice and accurate and for those who didn’t have the opportunity of acquire the chi Temple, this looks a great chance (ok!!, more modest) to fix the error. Enjoy the pictures at the gallery!