The Scorm’s Scorpion Stinger is one of the new Legends of Chima’s sets that will soon be available in retail. It will bring around two hundred pieces, perhaps a bit more and will feature a fearful massive attack vehicle with the shapes of a Scorpion and three new mini-figures: Scorm, Laval and Cragger.

At the first glance, even if it’s not one of my favorite’s Chima sets, I must say that this is one of the most complex vehicles in terms of design because if we look closely, it’s quite hard to find a flat brick, every single part of the Scorpion looks always very sharp.

In terms of structure, it is considerably large with special relevance for the front axle that includes two extended arms, that are fed by two longs hoses, with a couple of big claws that can be easily moved thanks to a knob placed next to the cockpit, ready to grab the enemy. The Scorpion’s face is also quite pronounced with four red eyes and a couple of green sharp teeth.

In the middle of the vehicle, the cockpit for Scorm looks quite large and with a enormous reinforced protection. From there, he can easily control the vehicle and also some nice interesting weapons such as the flick fire missiles and most of all the green ball launcher placed at the tail. This looks definitely the hottest feature in terms of playability, allowing shooting powerfully the green ball (there are five in total!!) against Laval or Cragger. The four spare balls have a couple of useful deposits just next to the cockpit where they can be easily stored. 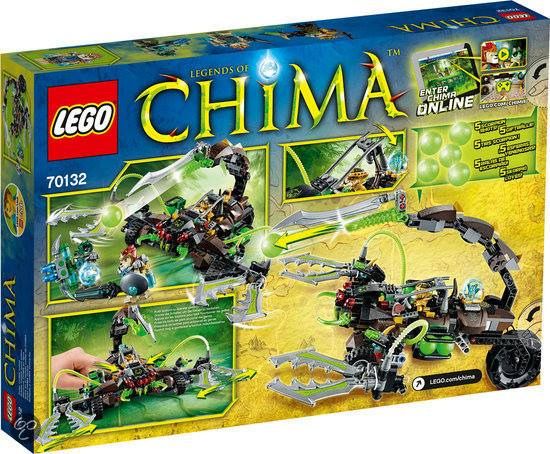 Finally the back axle has only a single but big wheel (compared with the other two) that gives this vehicle the shapes of an tricycle and at the same time is the base of the long tail that is built with several technic elements mixed with a few dark brown bricks assuring that the green shooter can also assume multiple angles.

Overall this looks a very particular set with a few interesting features but on the other hand with a very heavy look. It has the advantage of having mini-figures of several tribes which is definitely an added value, but at the same time there are, in my opinion, a few more interesting Chima Sets that will certainly cost the same or even less. Enjoy the pictures and take your own conclusions!