Legends of Chima is a theme with particular characteristics and features which sometimes ends in sets that I specifically don’t like. And it seems that the new Sparratus spider Stalker is one of them despite a couple of interesting features that we can easily observe through the set box image.

It looks at the first glance an entry set, however it brings almost three hundred pieces (it definitely uses many small elements) which is more than enough for the big spider with eight big claws and the two mini-figures from different tribes (it’s a tendency of the new 2014 wave, mini-figures of different tribes in the same set): Sparratus from spiders and Gorzan from Gorillas.

Looking to this worm, no one has doubts that it is a spider, the big claws, the red eye and overall the entire structure doesn’t fool anyone. The body is supported by the eight claws which seems different from each other but on the other hand have one item in common: they’re built with multiple technic pieces allowing the spider to assume many different positions and at the same time to attack the small Gorzan.

At the back, the spider has a sort of tail with is also movable and has incorporated a couple of projectiles, similar to the usual flick fire missiles. Finally the Gorilla doesn’t have many arguments to fight back the spider, however in a fight “one to one” with Sparratus the result seem much more balanced! 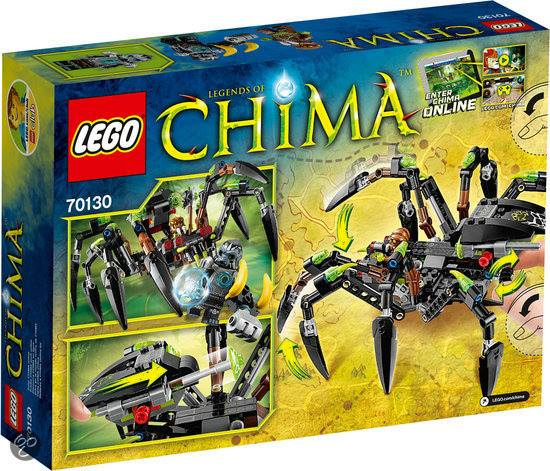 Globally as I mentioned in the beginning, this set is not for me. For thirty dollars there are definitely much more interesting sets than this one, even inside the theme, though the Chima’s collectors will have the final word. Please enjoy the pictures!