The Lion’s Tribe has been presented with another aircraft. The Lavertus’ Twin blade is a new Legend of Chima’s set that features an unusual vehicle with strange shapes, two mini-figures (Lavertus, the Lion and Scutter), a small black scorpion handled precisely by Scutter and a couple of Chi Weapons.

The Twin blade has at the front, just like most of the Chima’s vehicles, the shape of its tribe’s animal, in this case a Lion’s muzzle (the nose, the ears, the juba and even its mouth are perfectly clear) and it’s exactly here where Lavertus assume the control of the craft.

The main attraction of this set is obviously the couple of propellers, placed just behind the Lion’s head. With three blades on each side, it is built with an interesting technic mechanism that it seems to be triggered with a big bar or handle placed just in the middle of the creature, allowing the propellers to spin with high speed. And it’s not all because if we look at the set box, I guess that the propellers can assume several positions, which is definitely great in terms of playability.

Just below the propellers, a couple of blue Chi Lasers seem ready to attack the black scorpion. Finally at the back, the long tail looks quite simple and at the first glance doesn’t hide any more features. The black scorpion isn’t very big, but with six claws, a fearful tail and a big hammer at the front I’m quite sure that Lavertus needs to be very careful with its attacks! 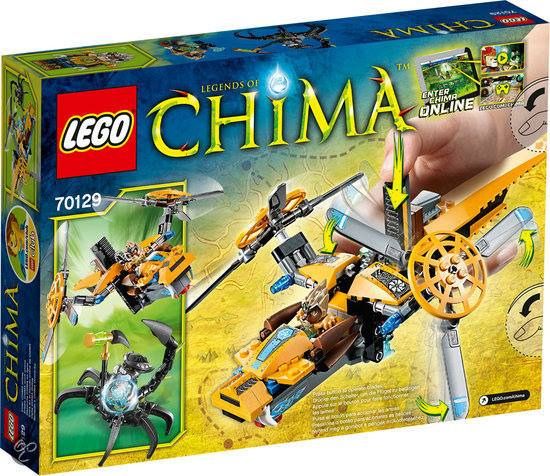 Overall it’s not, in my opinion, one of the most enthusiastic sets, despite the nice color scheme and the different mini-figures, but I’m sure that the Chima’s fans won’t have the same opinion. The price is not known but looking at its size I would say that this look a 20/25 Dollars set. Have a look at the pictures.