The Braptor’s Wing Striker is a new Legend of Chima’s set that will be available in the beginning of 2014. With a bit more than hundred pieces this entry line set features a black aircraft, the Wing Striker, two mini-figures of different tribes (Braptor and Eris), a small Chi source and some really nice weapons for the two guys.

The Striker, just like most of the Chima’s vehicles and aircrafts, has all the shapes of its tribe in this case the bats. The muzzle, the long ears and the green eyes are just great and clearly identify what kind of beast is this. As it wasn’t enough the four black wings give the striker the final look in terms of aesthetic.

Behind, the head there is what it seems to be a stand pilot position with plenty of space and just next to it, four laser guns ensure that Eris will really be in trouble when facing Braptor. But there is more for this little eagle because with an ingenious mechanism, triggered just behind the pilot, the four wings are easily movable in order to grab the eagle and pick up the Chi. 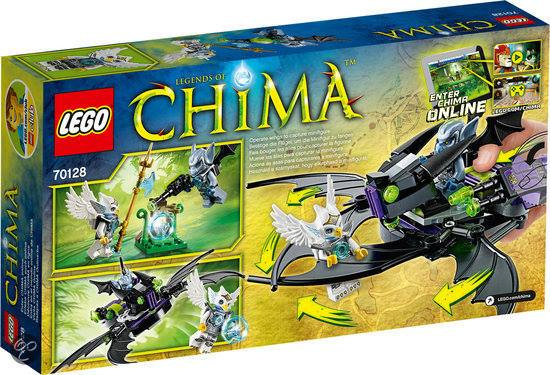 The Chi source couldn’t be simpler but surely looks very good. Having a look at Braptor, a new mini-figure, it keeps the line of details of the other tribes, and in this case the bat face with big ears and the wings at the back definitely identifies as one of the new tribe! The probable fifteen bucks that it will cost seems fair to this new aircraft that the Chima fans will certainly enjoy!