The Lion chi Temple is one of the Legends of Chima second wave’s sets and perhaps one of the more impressive. The exactly number of pieces is not known yet but according to the average price per piece of the first wave and the estimated price of hundred pounds, I would say that this set will have something around the eight or nine hundred pieces.

The set, besides the big Temple will have seven mini-figures (which will be Lagravis, Laval and Longtooth from the Lion Tribe, Ewald from the eagles, Cragger and Crawley from the Crocodiles and finally Razar from the Raven tribe), and according to the pictures two small vehicles (that are place just in the front of the temple) and a small jet for Ewald. 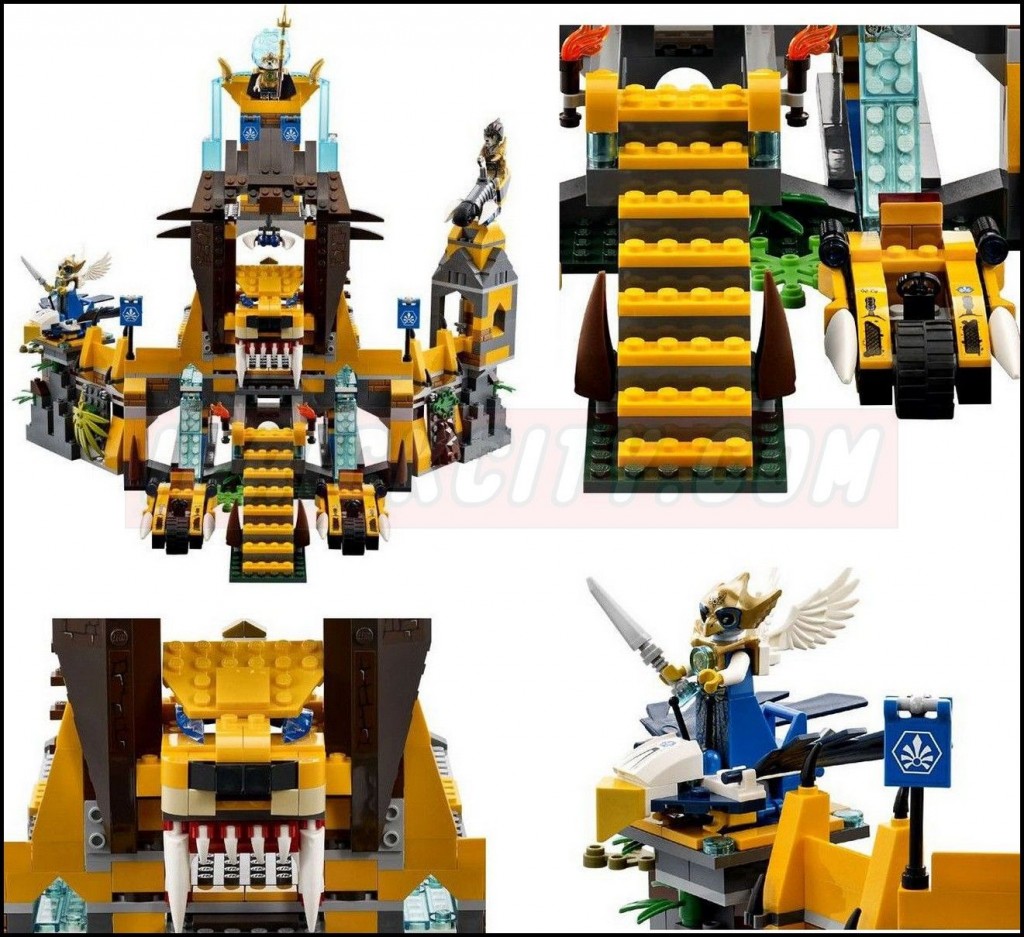 Four tribes, together, on one fantastic set will surely bring a lot of action, fun and playability but also will allow integrating many other nice sets from different tribes. The seven figures are not particularly knew, every one of them appear on the first Chima’s wave but all of them have pretty nice details and this is definitely an opportunity (expensive of course) to achieve them in only one set. 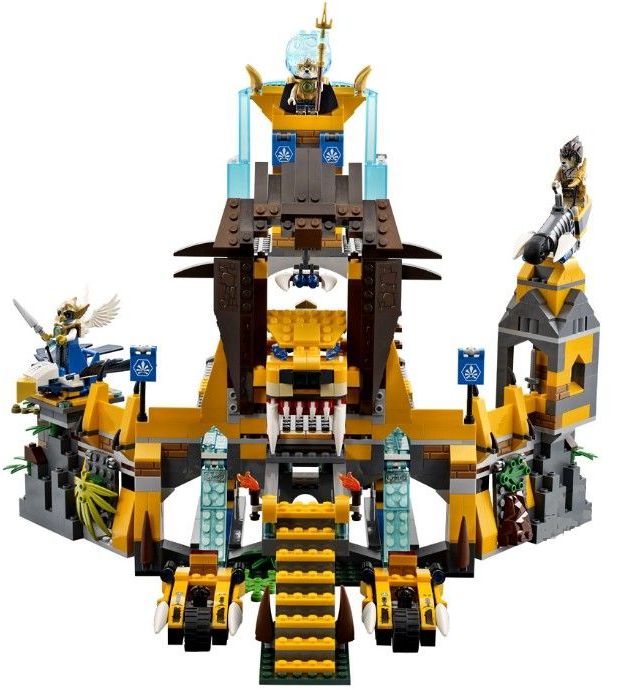 Looking at the temple, there are clearly three different sections all of them with outstanding features. In the center, the big lion head is obviously the first thing that catches the attention. The lion head is again perfectly reproduced with all the details clearly identified: the sharp teeth and the jaw, the big blue eyes and even the mane and ears are simply perfect. It’s surely an impressive sculpture.

Just in front of the Lion, in the lowest level, the big central yellow and brown ladders lead the way to the central temple. They have two big brown sharp teeth and just aside of them, two big blue Chi cascades fall majestically, giving the temple not only the most wanted source of power but also a great color combination. 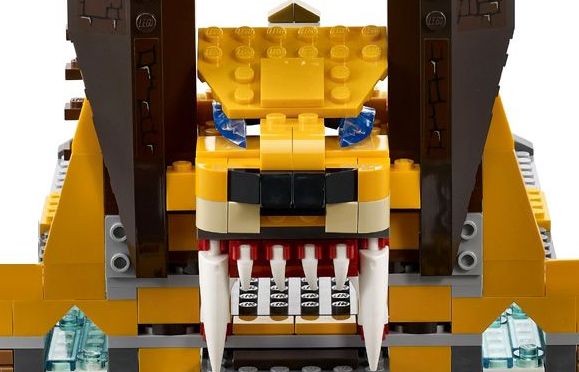 In the left side, we can see a tower made with grey and yellow pieces, with some kind of weapon of feature inside. Through these pictures, unfortunately it is not possible yet to see what it is but above, there is a nice cannon that turns 360º and shots powerfully the big missile. I must say that these missiles are excellent, quite different from the more traditional flick fire missiles. 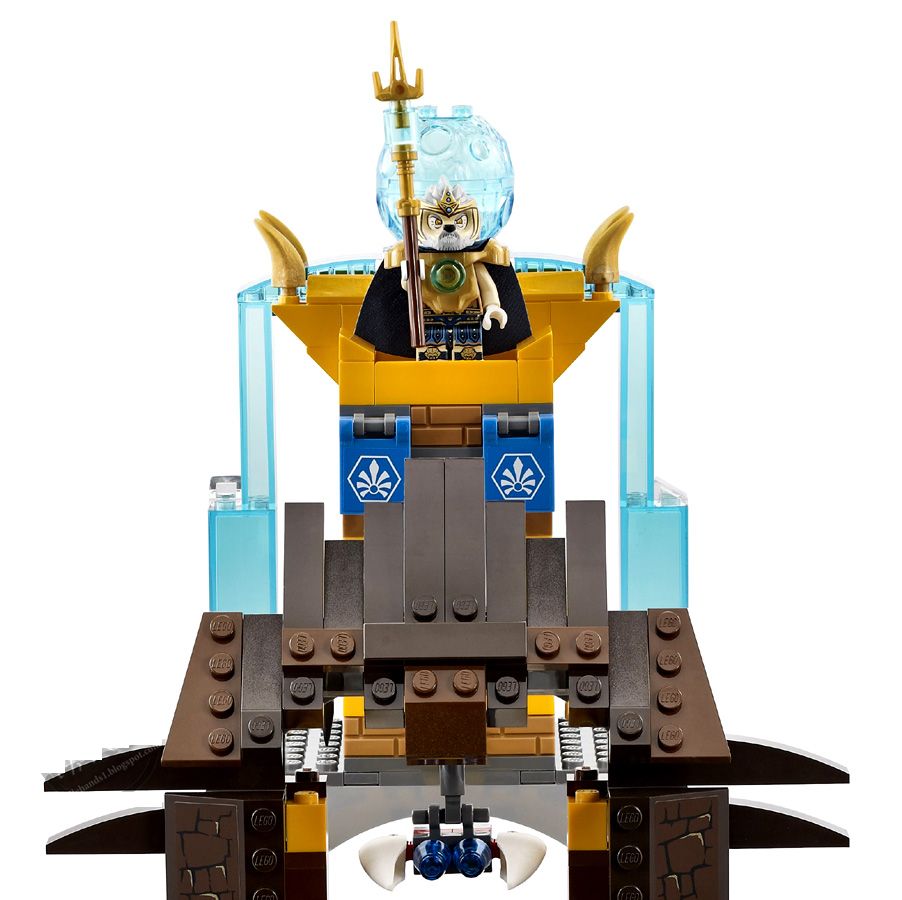 The opposite corner is filled with a smaller tower that is simultaneously a platform for the Ewald’s jet that has the shape of a small eagle. Both sidewalls have what it looks a hidden door, disguised with a couple of bushes.

Finally at the top, we have Lagravis throne. The magic Chi is present making a nice blue arch at the back. On the other hand, Lagravis has what it looks like a big blue mask or glob and a big golden spear. Just below the throne we can see a small trapdoor that surely suggests a feature but honestly I can’t figure out, yet, what it is. 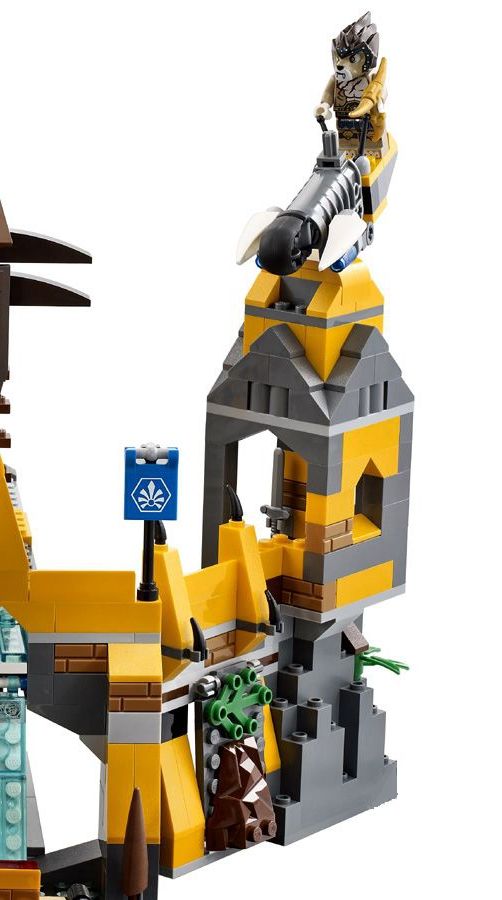 Globally for the Chima’s fans, this is definitely a must. It won’t be cheap but the features and details look huge and wiil worth the price. I’m sure that there some more details or features that I haven’t spoken here (the Lion head has definitely something…), I apologize for that, but through the pictures it is not possible to have a complete and clear look of all that this set has. But until June we’ll certainly see much more about it.