The Eglor’s Twin Bike is one the five regular Legends of Chima sets that will be released next summer. Being the smallest of this group with “only” two hundred and twenty three pieces, the set brings, besides the twin bike that can easily be transformed in a jet, a small jet and two nice mini-figures: Eglor from the Eagles Tribe and Razcal from the ravens.

Looking closely to the pictures, I guess that this nice jet bike is a bit more complex that it looks at the first glance. The chassis is built with a mix of technic and small pieces, creating a structure that will allow attaching the wheels and the “eagle” parts but also will permit the wheels and the top structure to turn ninety degrees in order to transform it in a nice jet.

The vehicle is powerfully moved thanks to the Chi, the chima’s source power that can be found in the main structure, just below the cockpit and for that there are two single slots that allow holding them.  The two white wings that turn around when changing to the jet, can also assume multiple positions which is excellent in terms of beauty and playability. On the other hand, both hide a couple of blue Chi weapons that will surely hit Razcal. 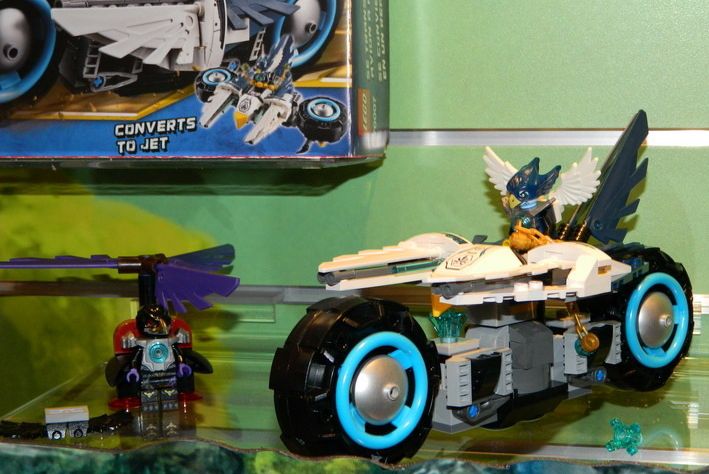 The piloting position is also very nice and at its front, the Bike’s nose assumes the shape of an eagle’s beak. Razcal, for its side, has a small but agile jet with a purple propeller that includes a weapon to hit the Twin Bike. In terms of mini-figures, they are not particularly new but on the other hand they’re pretty accurate and a nice addition to a collection, especially if you don’t own any Chima’s set. 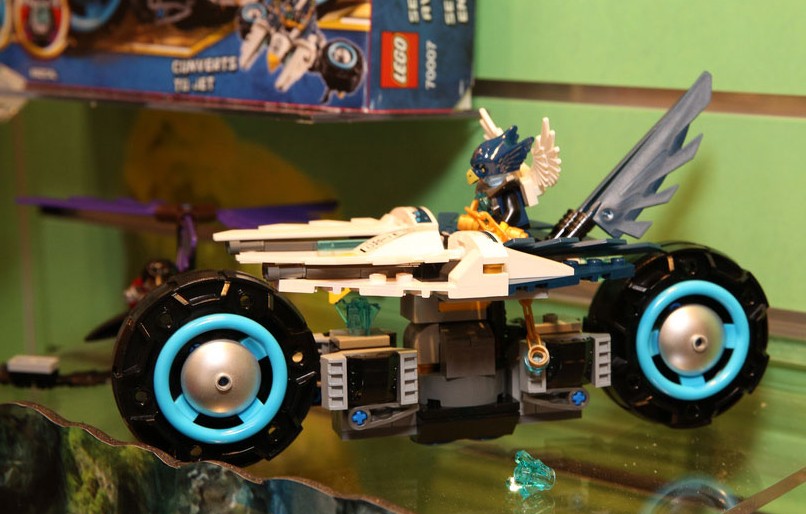 Globally, the Eglor’s Twin Bike assumes a relevant position on this new wave of Chima’s set. Besides its beauty and playability, it is the only cheap set that will be released which will certainly be crucial for many fans and the twenty five dollars that it will cost won’t be too much according to the number of pieces that it brings. Please have a look at the gallery: