I would bet that most of us haven’t touched or seen a Legend of Chima’s set on stores and there is already a confirmation about a 3×1 Super pack for this theme. This big set will contain three Chima’s sets, 70000 (Razcal’s Glider), the 70001 (Crawley’s Craw Ripper) and the bigger 70003 (Eris’s Eagle Interceptor) which is already the core of the set box.

The three sets together cost around sixty dollars, maybe a bit more, so I would say that it is expected a price at least around the fifty bucks. There will be for sure plenty of action with all of them. 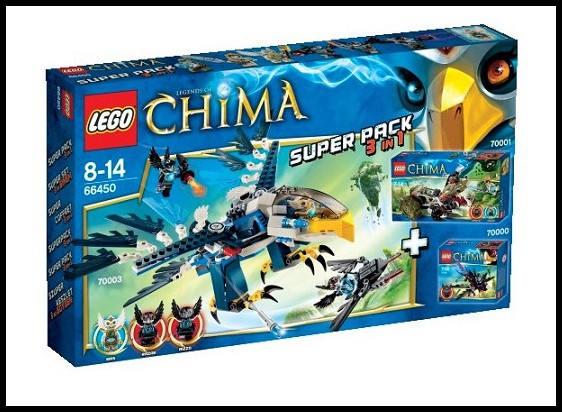 In total, the super pack will have six mini-figures from three different tribes and four nice vehicles: the eagle interceptor and the smallest jet from Rizzo, the Crawley’s strange vehicle and the small glider. When will it be released? It still unknown but I’ve never seen any super-pack on stores before autumn so in my opinion it won’t be release very soon.