The Coast Guard starter set is the entry set of the new Lego City subtheme, and a great opportunity to get some additional or occasional Coast guard material, without having to spend too much money.

This small set has only seventy six pieces and features a beach surveillance car, a watch tower with a yellow buoy, three mini-figures (a couple of coast guards and a surfer in trouble in the sea) with plenty of accessories (a surf board, a rescue board, a couple of walkie-talkies,  binoculars) and finally a deadly shark. 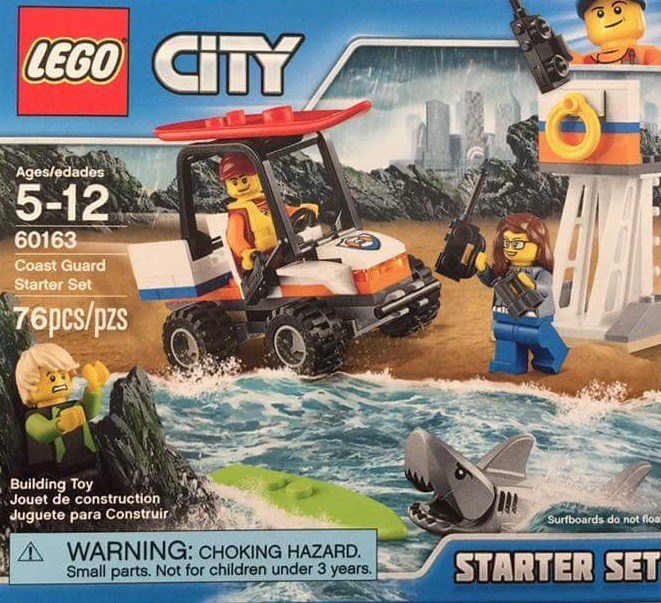 I like this rescue car.  With a small trunk, only with the enough space to transport a second figure, it shows a nice cockpit with a black safety structure to protect the driver in case of rollover and inside the driver has the usual: a steering wheel and a nice seat. On the top, the four studs ensure an extra space to transport the red safety board.

Just like the car, the watch tower shares the same color scheme, mixing white, orange and blue. It is not very high and according to the picture, the life guard has only a standing position to stay alert. At the back, and to access the top, there is also a black ladder which will definitely be a bit slippery if it rains. 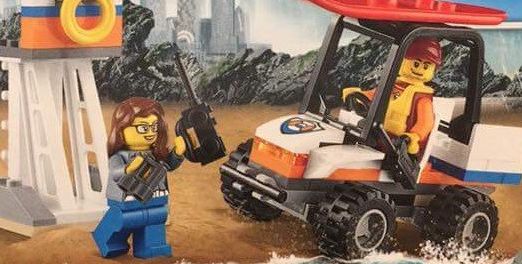 Overall for around ten dollars, I think that we can’t ask for much more. The car looks pretty cool, showing some nice elements to play with, the watch tower is also an added value in terms of playability and the figures look really good, especially the surfer and the driver with the orange suite. The set should be available on retail next June.