The next City Fire Plane has been unveiled. As the available pictures show, it features a pretty interesting and sturdy airplane with two engines, a couple of buildable trees in flames with some vegetation nearby, a small fire vehicle with a new water cannon and three mini-figures (three fire-fighters with different suites.

The airplane shows some nice details to enjoy namely the water compartment, the cockpit with the controllers or the small door on top. The trees look also really nice and one of them has also a small hideout for a weasel. The set just like the rest of the theme will be available on January. 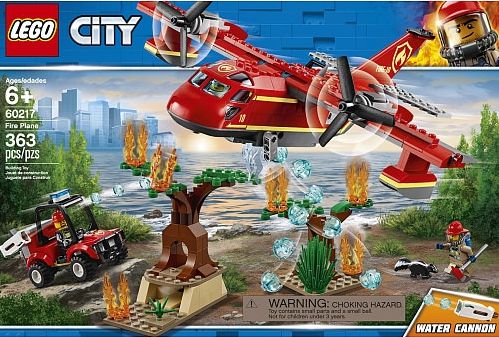 Help the firefighters protect the forest critters of LEGO City with the exciting 60217 Fire Plane set, featuring a dual-propeller firefighting plane with pontoons, detachable minifigure cockpit, hatch on top to load the water elements and a lever to drop them This rescue building toy set also includes a fire buggy with new-for-January-2019 3-shot stud shooter, plus 2 trees, 3 minifigures and a skunk figure

-Includes 3 LEGO City minifigures: a pilot and 2 firefighter minifigures, plus a skunk figure.

-Also includes 2 buildable burning trees, one with a burrow at the base for the skunk to hide in.
-Accessory elements include 14 water elements (6 small studs and 8 larger elements), 6 buildable fire elements, and new-for-January-2019 smoke gear set and fire axe.
-Open the top hatch and fill the plane with water elements. 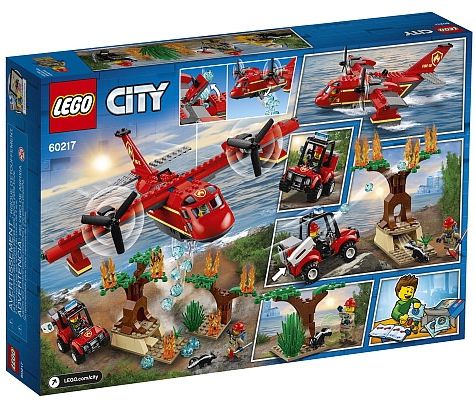