In addition to the Fun in the park (60134) and Fun at the Beach (60157), in next Summer there will be a new City mini-figures pack, this time with plenty of stuff about outdoor adventures. The set seems slightly smaller in terms of piece count and I would say that it won’t pass the hundred and fifty bricks.

Despite its size, it seems particularly attractive, featuring fourteen characters including a couple of Hikers, a Bike rider, three citizens, a couple of campers, two rafters and a family with two kids. Obviously, all of them will bring the traditional accessories to play with.

Besides the bunch of mini-figures, the set will also include a yellow inflatable boat, a new eagle, some boards with the different destinations, a red tent with nice printing details, a mountain bike with a log and a ramp for some nice jumps and finally a big rock prepared for climbing. They’re surely some really nice elements to enjoy and to add to a City collection.

Overall, it’s a pretty interesting set, with plenty of new mini-figures and nice stuff to play with. In my opinion, it should have one or two extra elements to put it in a similar level, if we compare it to the previous sets.  As usual this new city pack should retail around the forty bucks, a little overpriced if we attempt to the piece count. Have a look at the pictures and enjoy it! 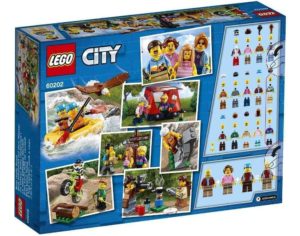 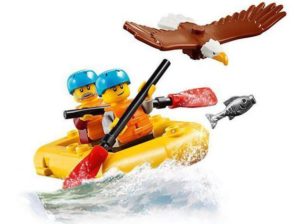