This is probably my favorite set of this next wave! The new Cargo Train set is absolutely a popular model with lots of staff to enjoy and play with and at the first glance, this one seems to be on the same level, not only with different carriages but most of all, it will be one of the trains that will show the new power functions kit as well as the app controls.

The set has exactly one thousand and two hundred and twenty-six pieces and features a new green locomotive, the usual three cargo carriages, a control tower with a big cabin on top, an armored truck with values and money inside, a traditional orange forklift, and six mini-figures (four workers, a robber and the van’s driver) with accessories. And of course, the usual rail tracks, this time with an always useful level cross and a new end line for the train. 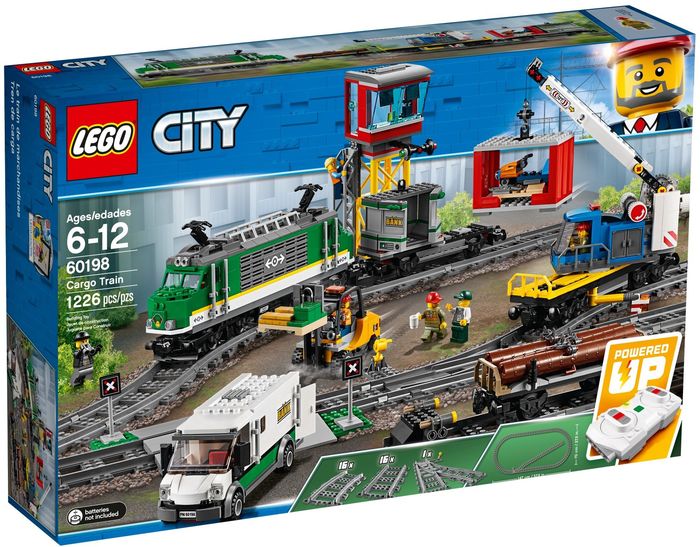 The locomotive is similar in terms of size and structure and shows a double cabin, both with the usual controls to maneuver the machine, with the battery placed between. The roof, obviously, can be easily removed and inside I must say that I am quite curious about the new power tools, how they’ll work and interact with a mobile device.

Looking at the carriages, the one with the crane is absolutely my favorite. It consists on a flat platform with a rotating cabin and a crane that can assume multiple angles that allow to move the cargo to the trucks. Talking about containers, there is another wagon with two, one to transport values and a second to transport a snow bike. And of course, for that, there’s an always helpful forklift to do the job.

The third wagon is the simpler and it basically transports a few trunks which will certainly be cool if we think about older wood transportation trucks, precisely with this type of cargo. The control tower looks good with a nice cabin with some flat screen and a few handlers, placed on top, on the third level to be exact. 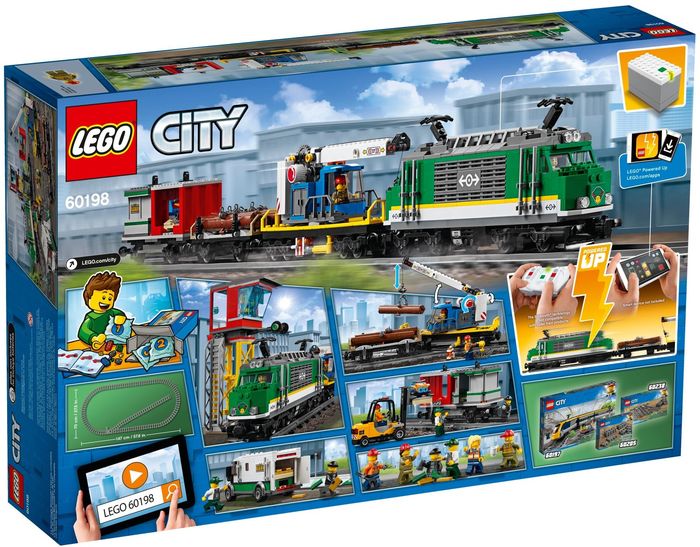 The white van is like so many other city vehicles. With a nice color scheme, mixing white and green, it shows the usual cab at the front with some extra protection, a sturdy look with some bars on both sides attempting that we’re talking about a precious cargo, and a nice compartment at the back to transport money and perhaps gold.

Globally it’s absolutely a quite tempting set, even for those who have older cargo trains. The crane wagon and the new locomotive look good, the guys despite being regular are six, which is a pleasant number and finally the rail trucks have more straight pieces than usual with the con of showing an ending point and a level cross. The set should be available in a few weeks with prices around the two hundred dollars (A bit overpriced, isn’t it??). Have a look at the pictures and enjoy!