Why do I like this truck? First of all, before the playabilility, there’s the color scheme. The mixture of red with black looks absolutely pretty nice. On the other hand, the playability. Besides the two vehicles and all its features, it is possible to change the cargo or even attach the trailer to some different trucks.

Then, the set itself! The truck has a regular cabin with the usual: a few protections at the front, a detachable roof with a few orange lights, doors and inside, the driver has the traditional steering wheel and seat. Behind it, there’s a trunk with plenty of space that will carry the big yellow toolbox and nearby there are also some clips to store a shovel and a screwdriver.

The long trailer has a flat bed with the appropriate space to transport the helicopter. At the front, there is a movable axle, capable of assuming several angles, which is great when it’s time to maneuver the long vehicle. Right at the front, there is space for some extra fuel and for the chains that will hold the fuel tank when it’s time to fly. The heli is simple, showing the usual cockpit with the big windshield that opens widely, a nice tail with a propeller and a stabilizer in the back, and of course the engine and rotors on top. 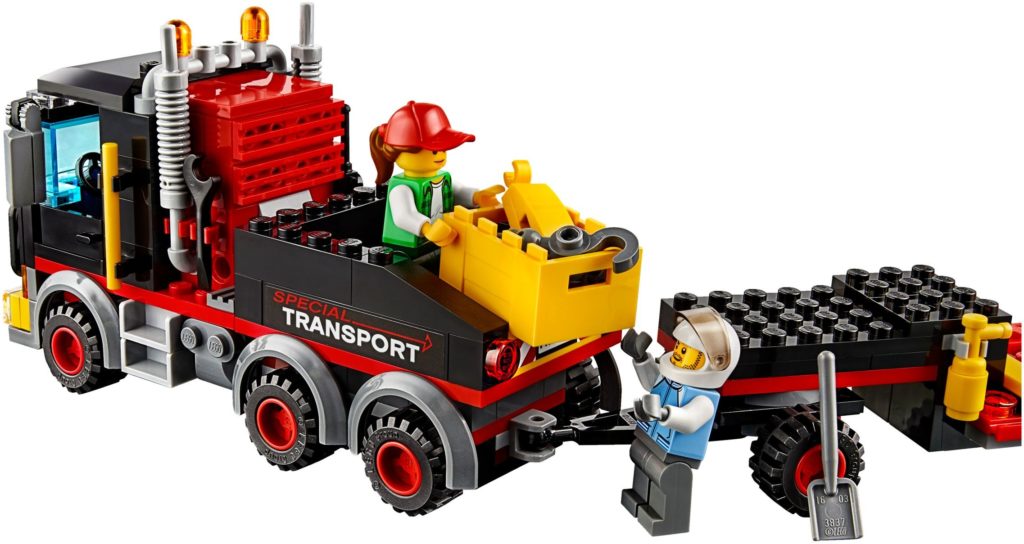 Globally for around thirty bucks, it’s absolutely a pretty interesting option. The truck looks great, it is capable to transport different cargo, a car for instance, and the mini-figures look pretty detailed as usual. Enjoy it!