The Pickup & Caravan is a new Lego City set that will be available in the beginning of 2018. With three hundred and forty four pieces, it is a sort of update of the 2016 model (60117 – Van and Caravan) and absolutely with better results. This new set features a nice red pickup, a big caravan and three mini-figures (a family of three with a couple and a kid) with plenty of assorted accessories.

Having a look at the van, it’s impossible not to say in the first moment that it won’t handle with the caravan. It looks sturdy, powerful and with a nice design. The cockpit is large but has no side doors, the roof detaches easily and at the back, the trunk is transformed to receive the attach mechanism of the big caravan.

The Caravan is absolutely bigger than many other previous models, and with plenty of small details and accessories, especially in the interior. From the outside it is possible to see a side door to access it and, in terms of playability, the right side opens 180 degrees, giving total access to the interior. 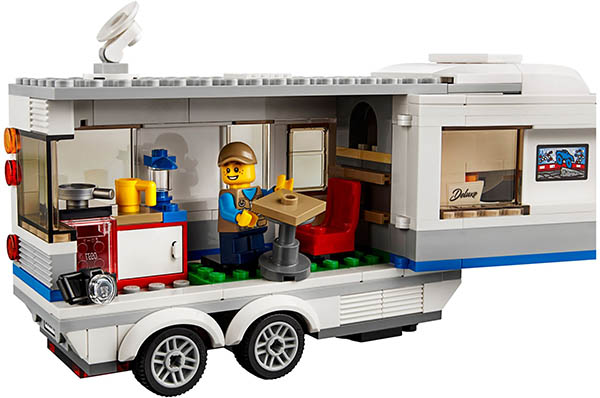 Inside, the family has a small table and a couple of chairs that can be moved to the outside, a small kitchen with all its main elements, a small flat TV in the wall and of course some extra space for the bunch of picnic accessories. In the front and above the attach pieces, the images aren’t clear in this point, but the guys seem to have space for a couple of beds to rest in every stop. 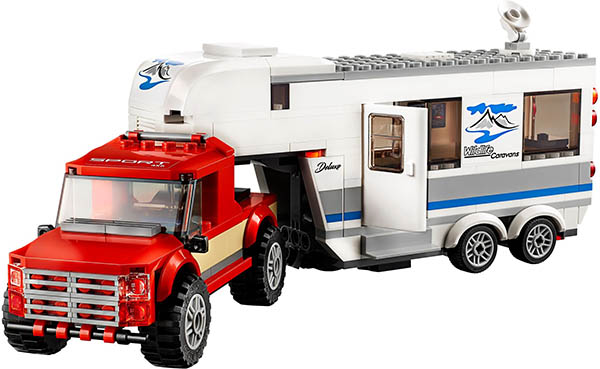 Globally, for around forty dollars, it’s one of the best city sets of the next wave, until the moment. The truck looks cool, the caravan is a huge update with plenty of stuff to play with and the figures despite being regular are once again nicely dressed with plenty of color. The set should be available next January, enjoy it!