Here’s is another 2018 City set that has been unveiled last week. Definitely, it is not one of my favorites, but I must admit that is a good addition to a few previous Stunk trucks sets. With around two hundred pieces, this 4X4 truck shows also a nice ramp, two gas bottles with flames and a single mini-figure, the pilot,  which is unfortunately a negative point in a twenty dollars set.

This beast has perhaps some of the largest wheels present in a City set, giving it, together with the suspension and impressive height. The suspension is clearly built with technic bricks and attaches to the rest of the structure in several points, giving the car a very sturdy look.

On top, the big engine is reinforced and the cockpit despite its naked look has the essential for the pilot. The roof, with four powerful spot lights, detaches easily and compensates the fact of not having any side doors which after all is the usual in these cars. Curiously the images aren’t clear about the trunk but with no surprise, I’m sure that there won’t be anything relevant there. 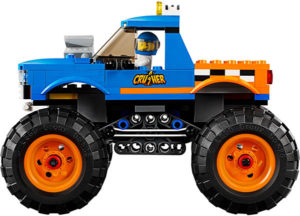 Globally, it’s a great set for the stunt car fans. The truck looks cool, just like the pilot and the brown ramp adds the set an extra touch of playability. Just like the others, this new city set will be available on retail next January.