The Monster Truck is a new City set that has been released recently. It’s a typical twenty dollars set, with around two hundred pieces that features a 4×4 Truck with an incredible suspension, a ramp built with plenty of small pieces for some nice jumps, a couple of barrels on fire and a single mini-figures, the truck’s pilot.

The truck looks absolutely cool in my opinion, even for those who aren’t so fan of these types of vehicles. With very big wheels and a high suspension built over a technic structure, the truck can smoothly surpass any obstacle thanks to its working mechanism and through the pictures it’s possible to see some small rubbers between the axles that control that extension feature.

On the top, there is the truck properly which actually doesn’t look very big. The engine looks powerful and has a nice air scoop. Inside the cockpit, there’s the usual stuff, a steering wheel and a seat for the pilot and on top on the detachable roof, four powerful spot lights. The trunk gets almost unnoticed but it shows a particularity, the color changes to orange, giving the truck a pretty cool look. 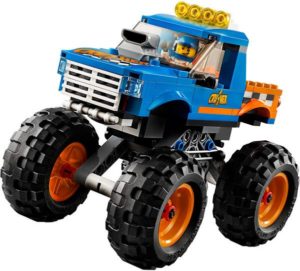 The ramp and the barrels are built with some small pieces and give the set a nice addition in terms of playability. Globally it’s a pretty interesting deal! The truck is the only hero but looks really cool and the pilot looks accurate, wearing a suite with the same colors of the truck. Have a look at it and enjoy!