The Heli is clearly the hero of this set. With big dimensions, it has at the front an opening cockpit with some handlers and a seat for the pilot. Inside the cargo space is extensive and more than enough to transport the crooks and the stolen money. At the back, there’s also a tipper door for a better access. 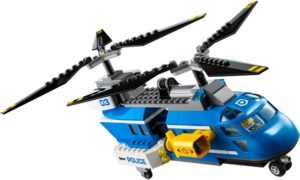 But the fun regarding the heli, doesn’t end here. The new yellow net launcher is also present and will surely give a help to catch the bad guys. On top there’s also a small crane to grab the bags or even the crooks. Finally, the two rotors with big propellers will ensure the appropriate power to the heli. 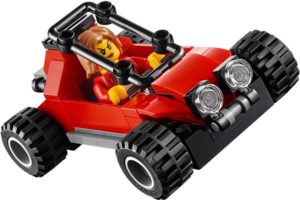 The Hideout looks also pretty nice! With two distinct levels, it is built upon the rocks and shows on top the small hut with a door and a couple of accessories inside. Nearby, there’s a crane to move up the stolen money and on the opposite corner, with a nice view, the crocks have a also a round bathtub and they’ll surely need it! 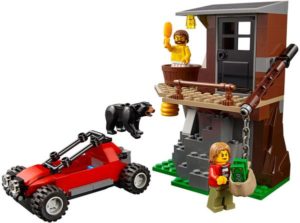 The buggy is almost a classic in the police sets and this one follows the trend. It is red, seems powerful and has a small stud at the back to transport the money. The usual black protection is also there for the driver protections in case of rollover.

Globally, it seems a pretty interesting set. The heli is big and with several interesting features, the hideout looks nice, the figures are once again nicely printed and best of all, it is already available on retail for thirty bucks. Enjoy it! 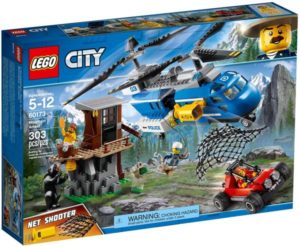