Here we go for the first 2108 City set that has just been unveiled, the Dirt Road Pursuit. This new set seems to make part of the new city Subtheme, the Mountain Police, and shows, despite being a Police set, some new cars to enjoy and best of all, a new feature, a yellow net shooter.

As you can see, the set shows a new Police Truck with big wheels, a red buggy for the crocks, a police motorcycle, a small hill with a tricky rock, a road sign and three mini-figures (a couple of police officers and the robber) in a total of two hundred and ninety seven pieces.

The Police Truck is absolutely sturdy. Not very big, it has however a raised suspension with extra large tires, capable of trespassing any obstacle in the mountain. With no side doors and a small hood, the cockpit seems to have the indispensable: the steering wheel and four studs for the seat. Behind it, in the trunk, the fun begins with the new net shooter. The idea is to grab the bad guys with it but will it go far enough to do it? 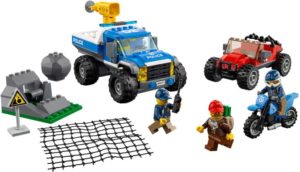 The buggy isn’t much different from previous cars, even in the color, but looks pretty good. With some protection bars and big wheels it has curiously a larger windshield, if compared to the truck, and space inside for two figures. There’s no image from the back but it’s possible to see the mentioned big black bars.

The rock launcher is the tricky part of the set. Triggered through the back, the big rock can be dropped (or can I say launched…?) towards the cars in order to make some damages. Finally a word for the mini-figures which being officers and a crock, seem to be new guys with different printed suits. 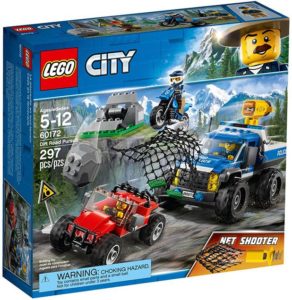 Overall, it’s a pretty interesting set, especially if you don’t have many police sets. The vehicles are cool, the new net shooter is a great added value element that will possibly be available in other sets and the figures look accurate and a nice addition to a collection. The set will presumably available in January with a retail price around the thirty dollars. Enjoy it!