The Sailboat rescue is a new City coast guard set that has recently hit stores. This small size set has around two hundred pieces and features a beautiful sailboat, the coast guard rescue boat, a small island with a couple of rocks, two mini-figures (the sailboat guy and the guard) and an usual shark.

Definitely, I like both. The coast guard boat presents the usual orange color scheme and shows some really nice features to play with. The cockpit is placed in the middle and is totally protected by a big blue windshield. Just aside it, there are two clips for the walkie-talkies as well as a couple of lights.

And if these aren’t enough, there is also, in the bow, a powerful spot light that can turn left or right. Just behind the cockpit, an extra compartment can transport an extra passenger and finally, right at the back, two powerful and detailed engines give the boat the appropriate power to move in high speed. 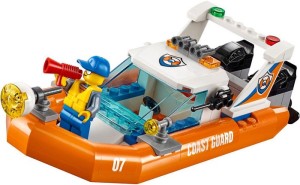 Having a look at the sail boat, I must say that the green sail is quite pretty. The deck is a known element, mostly used in high-speed boats, and this time gives it a very cool design. At the back there is space not only for several figures but also to maneuver the big sail and apparently this time, the trip didn’t end well and the boat went straight to the big rocks! 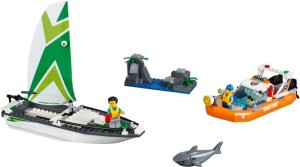 Overall, it’s surely a nice city set, especially if you like boats. Both look very interesting and with nice features to play with, the figures look quite accurate and the price, around the twenty dollars is in line with the usual.