The Sea Rescue Plane is a new Coast Guard set that will be available on stores next June. With only hundred and forty one pieces, this small set provides a sea plane with the traditional coast guard color scheme, a rescue jet ski, a yellow inflatable buoy and three mini-figures (a couple of coast guard officers and the shipwrecked),

In the first look, I must say that I’m quite impressed that such a small piece count is enough to build all these elements. The plane looks reasonably big and in addition the buoy and the jetski aren’t very small either. 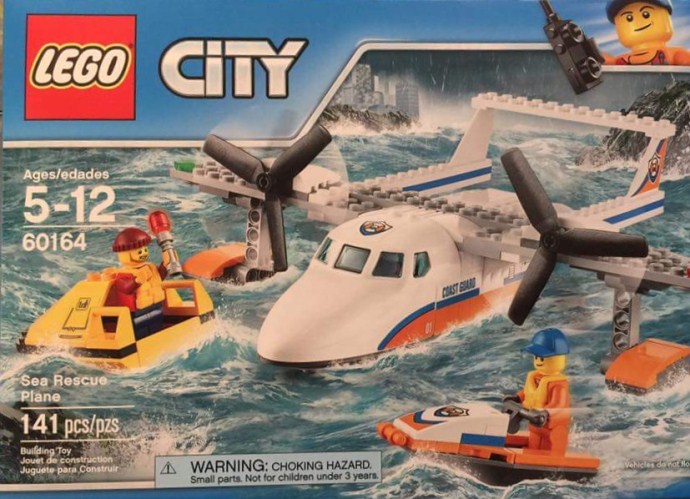 The focus goes obviously to the plane and despite not having a full idea of all perspectives, I think that there are some nice features to play with. The front is similar to other City planes with the long nose and the tiny cockpit windows and inside we’ll probably find some handlers and panels for the pilot.

The floaters are stuck to the structure thanks to a few technic pieces and the propellers, together with the engines seem to give the plane the appropriate power. Unfortunately there aren’t pictures from the back but as far as I can see, behind the cockpit there is certainly some extra space for more features and of course to transport the rescued guys. 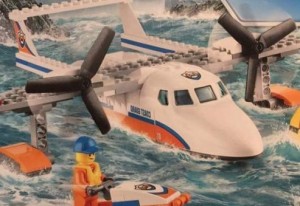 The yellow floater is also an add value in terms of playability. It’s rare, perhaps unique and is absolutely a great addition to other Coast Guard sets, being able to support a couple of figures with some lightning accessories. Finally the jet ski, that not being properly new, provides the set an extra element in terms of playability.

The mini-figures as always look pretty cool with especial relevance for the coast guard guys. The set should be available on stores next summer with a price around the twenty dollars.