The Jungle Mobile Lab is a new Jungle City set that been recently released. With exactly four hundred and twenty nice bricks, it features a big yellow Lab truck with plenty of details to enjoy, a plant monster, a red kayak, a nice cascade with some tricky features and four mini-figures (two jungle explorers, a photographer and the truck’s driver) with plenty of assorted accessories.

The Truck looks quite interesting. With big wheels and a raised suspension, it shows two distinct parts: the cockpit that can easily transport the four guys and the Lab, a bigger compartment with easy access and lots of research tools inside.

At the front, the engine and the windshield are protected with a black bar which is imperative in this environment. The cockpit has a double roof, some small windows on both sides and room enough to transport four figures. On top it shows two powerful spotlights as well as an antenna.

The Lab is placed just behind the cockpit and can be accessed through two ways: the roof that can be easily opened and the left side which opens widely. Inside there are several useful accessories: a laptop, a small table and a digital balance among others. Outside there are also a couple of clips to store some tools and two powerful spotlights. 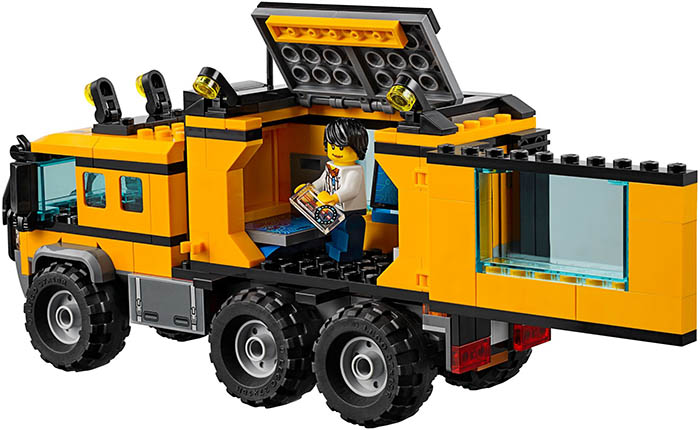 The cascade is also very beautiful. On the right it shows some sloping ladders and a bush on top with a secret spot. The cascade has also some tricky features, namely a hidden crocodile that can easily appear through the water and a rope on top for the explorer. Talking about the guys, as usual, they’re pretty nice and a good additional to a figure’s collection.

Globally for around forty dollars, it’s absolutely a really nice Jungle set with interesting features to enjoy. The truck looks good, showing good playability and the price looks in line with the rest of the theme. The set is already available on stores. Enjoy it!