Here is a set from a new City Subtheme, the Jungle, that will be available on June, the Jungle Halftrack mission. With yellow vehicles, plenty of vegetation and new mini-figures, I think that it will surely have everything to be a success.

This set, particularly, has exactly three hundred and seventy eight pieces and features two Jungle vehicles (a truck with Rubber Tracks  and a sort of ATV), perfect for this environment, a couple of mini-figures, a black panther and finally a totem with a precious jewel that somehow will be taken by the team. 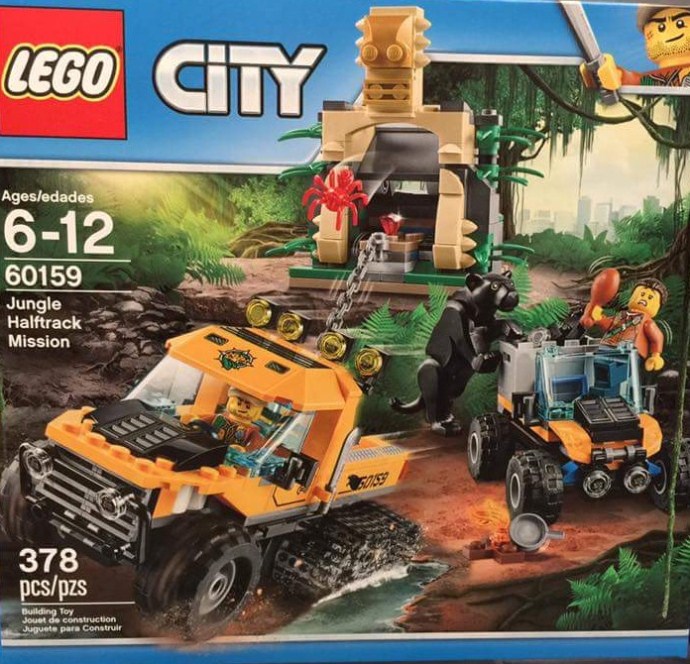 The Truck looks absolutely cool. With a raised suspension, extra large tires a hood protection bar at the front and an extra air refrigeration for the engine, together with the rubber caterpillars, this car seems to surpass any obstacle in the jungle. The cockpit at the first glance is similar to so many others and the roof, with four powerful spotlights, detaches easily.

At the back, the truck has space to store some stuff, namely the chain to pull the stone and just below, a small technique structure ensures that the back wheels work correctly. The second vehicle is smaller and basically transports a box with some tools and food for the two explorers. That will certainly call the attention of the wild animal. 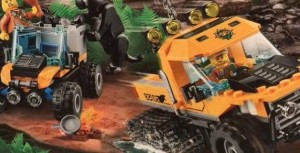 The totem has the shapes if an animal, the muzzle, the eyes and the legs are nicely reproduced and inside, among the grey rocks there’s a precious jewel that the explorers will pull, from the inside with the help of the truck, most probably because of a bobby trap.  Finally, a word for the new mini-figures that present some dark orange torsos and blue pants and not being particularly enthusiastic, they seem to be quite adapted to the theme.

Overall, it’s definitely a really great set, from a new theme, with several elements to enjoy and play. Just like the rest of the wave, it will start retailing next summer with a price around the forty dollars.