The Jungle Cargo Helicopter is a City set from the new Jungle Subtheme. With around two hundred pieces, it brings a yellow Cargo helicopter, an ATV with a new design, a small island with a totem with some bushes and two Jungle mini-figures with assorted accessories, including a toolbox that can be pulled by the heli.

And talking about this one, it is surely the big attraction. With an unusual design, prepared to transport goods or vehicles with a winch, it shows at the front a small cockpit with some handlers, a set for the pilot and a long windshield that is at the same time the only access to the interior.

The Landing Gear is a bit different that the usual but, you’ve probably seen it in other Lego helicopters. The purpose of those is transporting the ATV or other objects with the winch that can be controlled through a knob placed at the right. The tail looks pretty simple and the back propeller is attached to a nice and unusual (in City sets) technic piece. 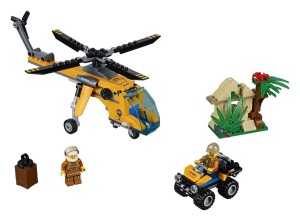 The ATV looks cool and different from previous models. It shows a nice seat, some handlers for the driver and a small space with a safety bar to transport small objects. The totem with a small tree nearby is built with plenty of small pieces and shows besides a red spider, a nice tricky lever that moves the bush and shows a golden trophy. 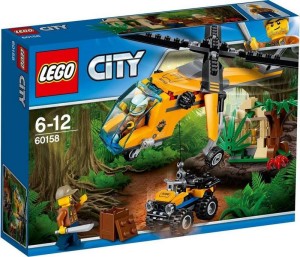 Overall, it’s definitely a pretty decent set. The playability is in high levels, the Helicopter looks great and the mini-figures, not being fantastic, are new and a good addition to the collection. The Jungle Cargo Helicopter should be available on stores next June with a retail price around the twenty dollars.