Fun in the Beach is a new city set that has recently been unveiled and will be available on stores next summer. It is, like the set box mentions, a people pack, with lots of mini-figures (fourteen to be exactly) and an endless number of features and accessories to play with, being a truly addition to the Fun in the Park set (60134).

The set of mini-figures include four children, an ice cream seller, a life guard, a Garbage Man, two beach volley players, a metal explorer, a diver, a grandma, a kayak paddler, a wind surfer and a tourist that is enjoying the sun. 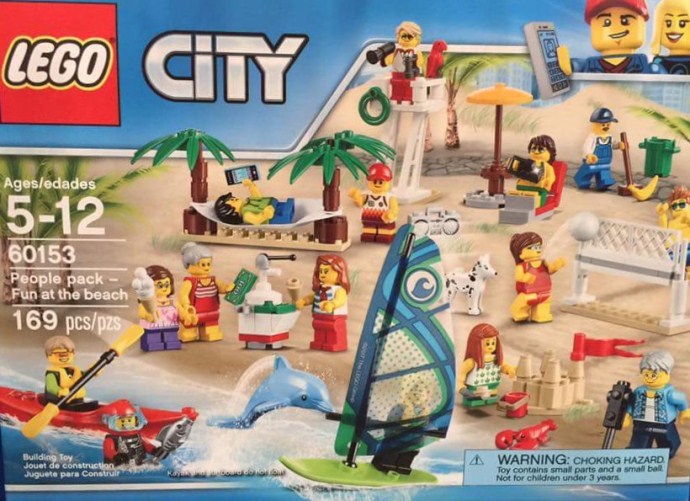 This time, there aren’t any buildings or vehicles to talk about, but three are surely some nice elements that can be a great addition to a town on different scenarios such as the streets or sidewalks, a playground, the beach of course, water sports, the diving team or even a simple backyard.

And for that, the set features a nice wind surf board with a dolphin nearby, a small red kayak, a sand castle, an ice cream machine, a volleyball net, a resting net tied to a couple of trees, a watch tower, a small esplanade with a nice sunshade, a garbage can and of course for each one of them, a considerable number of accessories.

Globally, just like the fun in the Park, it is absolutely a very interesting set and in my opinion a must of those who like City theme. There are plenty of nice elements, some of them quite unusual and the mini-figures are really cute as well. If we think about the price, around thirty five dollars, it is taking in count not the number of pieces, but the huge number of mini-figures and in my opinion seems fair.