Here is another great vehicle from the new wave of City sets. The new Sweeper and Excavator is perhaps one of the biggest Winter presentations, until the moment, and features around three hundred pieces and surely a lot to play with.

The set includes a truck with a double sweeper at the front, a long trailer that is considerably wide according to the usual standards, a yellow excavator, two mini-figures (road workers) and some additional accessories like tools (a wrench, a shovel, a broom and a jackhammer), a traffic sign with a light on top, a couple of road signs and a small wall under construction.

The truck isn’t very big, but definitely looks sturdy and shows a raised suspension, capable of surpassing any obstacle. Right at the front, in the middle of the bumpers, there’s a double sweeper that assumes multiple angles and starts working whenever the vehicle is in movement. 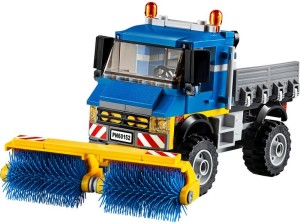 The cab is similar to so many others, showing the usual inside, a steering wheel and a seat, but nearby there are some different details such as the ladders to climb up inside and the couple of bars to help the driver. On top, the roof is once again detachable and features also a couple of orange danger lights.

At the back, the trunk has a few clips for the tools and a lot of space for the building raw materials. Having a look at the trailer, it is eight studs wide, and is attached with the usual ball mechanism, presenting all the safety requirements for a good trip. At the back, a couple of tipper accesses ensure that the excavator climbs safely to the trailer.

Finally, the Excavator! It is also rather simple but shows all the major elements that a road vehicle like this must have. The cockpit is built up on a rotatable platform, and shows a black structure for the driver’s protection, and best of all, at the front, the long arm with the shelf can assume almost all the possible positions which is great in terms of playability. 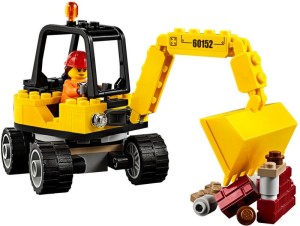 Overall, it’s absolutely a really nice deal for thirty dollars. The playability is in high levels, the two mini-figures seem to have new suits and lots of tools to work with and the vehicles are absolutely cool. The set should be available on general retail in the beginning of 2017.