The ATV Race Team is a 2017 City set with two hundred and thirty nine pieces that features a cool truck with a trailer, a couple of race All Terrain Vehicles, and two racing pilots with assorted accessories, that includes a small fuel tank, a spare wheel and some tools to fix the malfunctions.

The concept and the vehicles aren’t properly new but together, I think that they make a really nice set with lots of options to play with. The sturdy truck is similar to other city models and shows a nice color scheme with some additional stickers.

The wheels are bigger than the usual, and having no side doors, the naked cab shows the usual: a steering wheel in the middle, a couple of different but strange rear mirrors and four studs to seat the driver. On top, the roof is probably detachable to access the interior and features four power spotlights.

The trunk is flat and wide, but has the appropriate pace to transport one of the ATV. The trailer has the usual attaching mechanism and features the usual smaller wheels. Just like the truck it can transport the second ATV with total safety and has even some extra space for an extra wheel, a fuel tank and a clip with a tool. 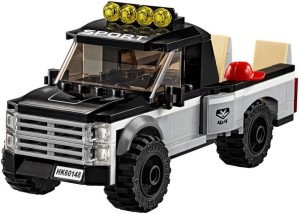 The ATVs look definitely cool but more compact than usual. With the same design, the only thing that changes are the colors, the hood has space for a nice numbered sticker and a light at the front.  The pilot has a decent seat with a handler and at the back there’s only a red breaking light. No clips or additional stuff this time.

Overall, it’s absolutely an interesting Traffic City set. The four major elements look good, with some nice features in terms of playability, the pilots are as always quite accurate and with nice suits and price, around twenty dollars, is in line with the theme!