The Auto Transport Heist is a 2017 Police Set with around four hundred pieces and perhaps one of the most interesting in this new wave of sets. The purpose of this entire scenario is to get again the stolen money, by the thieves, but there is definitely a lot more that can be done.

This new set features, as you can see through the pictures, a Auto Transporter truck, a nice convertible, a police car, a red sidecar, a small island with a barrier and four mini-figures with assorted accessories:  a couple of thieves with unusual suites and two officers, one for the truck and another to the pursuit car.

The transporter is absolutelya must in terms of playability and honestly I can’t remember a Police vehicle similar to this one in the last years. With a long engine with a protection bar in the front, the cab presents the usual: some useful side doors, a decent space for the driver, a couple of big rear mirrors and a detachable roof. 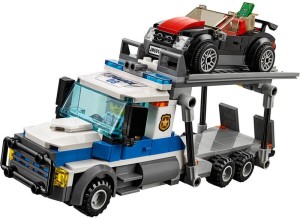 At the back, the fun begins with the car transportation. Thanks to a useful technic mechanism, pretty similar to the ones used in the yellow auto transporter (60060), the Truck can transport two vehicles and load and unload them in a very easy way, without compromise the sturdiness of the trips.

The black convertible, from the robbers, is absolutely beautiful. With a great color scheme and an awesome design, it shows behind the cockpit, a small compartment for the stolen money (probably a single stud to hold the bag). Right at the back the aileron, besides its beauty, is also an extra protection not to lose the cash.

The side car is also another vehicle that we don’t see every day. With the purpose of being a runaway vehicle, this motorcycle has, nearby the driver, a great extra seat that includes a tiny windshield, but honestly I’m afraid that the robbers won’t go very far with it, because the police pursuit vehicle, a model seen dozens of times on previous sets, will easily catch them. In terms of mini-figures, I think that the beast part is surely the two crocks and its new suits. 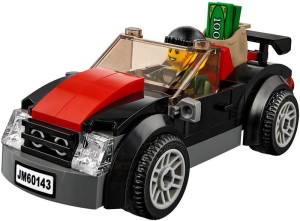 Overall, for around forty dollars, it’s surely a great Police set. The Auto transporter is fantastic and the playability is once again in higher levels. The set should be available next month on general retail. Enjoy the pictures!