Let’s have a look to the new 2017 Police station. It has almost nine hundred pieces, a little bit more than the previous model, but as always, a great number of features and details to enjoy that can only be found in this iconic city set.

The set features the Police Headquarters building with three districts areas (the cells, the headquarters with a heliport on top and a small garage with a surveillance tower), an helicopter, a high speed police car, a tow truck to the thieves, a police motor cycle, a dog and finally seven mini-figures (three thieves and four police officers) with assorted accessories.

Globally, I can’t say that there’s a radical change towards some previous versions but as always, there are some new elements that make this building a must, especially if you don’t have any. Having a look at it, the central headquarters is placed right in the middle and features three distinct levels.

In the ground floor, the only entry to the building goes almost directly to the interrogation room that shows plenty of accessories and stuff to play with: A small desk with a computer, a photo machine and near the door a small a small reception desk and a small path, in the back, that gives access to the cells.

The first and second floor and pretty similar and seem to be the office rooms. Both contain an identical desk with a laptop, a chair and a red mug. The only visible difference is that in the first you can get some water and in the second you can drink some coffee.  All around, there is plenty of glass, as usual and finally in the roof, it’s possible to see an heliport with the sufficient measures for a small heli. 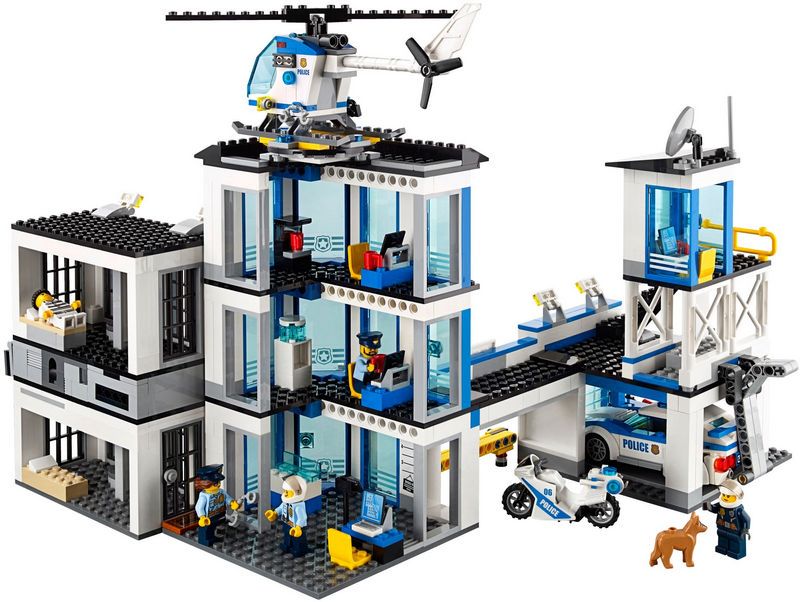 The cells are placed next to the head quarts, one on top of the other. Once again they’re similar and inside is possible to find a bed with a pillow and a toilet in the corner. Between both floors, there’s a tricky feature that include dynamite, a small technic mechanism and a busted cell. The final result is easy to imagine, the crook will blow the wall and probably escape with the partners’ help.

On the opposite side there’s the garage, not too big, but with the appropriate space for the police car. Between the buildings, there is an entry with a yellow barrier to park some extra police vehicles . On top of the garage, a small surveillance tower with an extra desk and a couple of antennas on top ensure the appropriate conditions for a good police work. 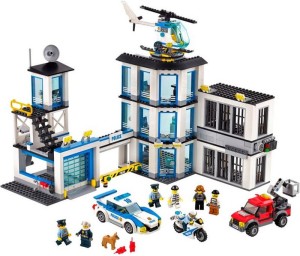 Having a look at the vehicles, they’re definitely two pretty cars. The high speed police vehicle is absolutely cool. With a big hood, some nice wheels and a racing look, it’s absolutely perfect to chase the bad guys. The small tow truck in not particularly new but it’s definitely quite balanced and the small lift on the back, adds definitely some fun in terms of playability. 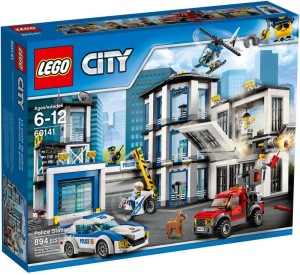 Overall, this set is a must, absolutely!! Just like every Police Stations, that are released almost every year, this set shows a huge building with lots of playability, three great vehicles (the bike has a great piloting position) and as usual a big number of accurate mini-figures. The set has just arrived on stores and retails around the hundred dollars.