The Tow Truck Trouble is a new City Police set that has recently been available on stores. This small set has only one hundred and forty four pieces but definitely a lot to play with, featuring a small red tow truck, two police motorcycles, a safe box, and three mini-figures (a couple of police officers and a thief) with several accessories.

In a small Police city it’s reasonable that the expectations aren’t very high in terms of something new because there are dozens and dozens of Police and crock vehicles, but looking at this one, I think that there are absolutely some nice details that aren’t easy to find.

Starting by the tow truck that being small, surely brings a sturdy and powerful look. The engine looks big and the cockpit is quite balanced presenting some nice side doors and a removable roof. Aside the doors, there are some clips for the crowbar, a wrench and an explosive engine to blow with the safe.

At the back, the winch can assume different positions and angles and with the help of a chain, it will have no difficulty to pull the safe which through the images seem heavy and full loaded with money. The bikes, on the other hand, seem pretty cool with the golden wheels. One of them is a high speed bike with a great piloting position and the other one, more usual, seems to surpass any obstacle to chase the truck… 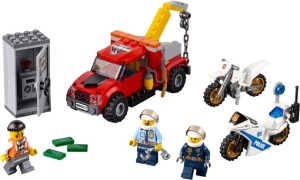 Overall, it absolutely a great Police set with lots of stuff to enjoy. The vehicles look cool and the mini-figures, despite being just city characters, seem quite accurate with great suits. The set is already available and retails around the twenty five dollars, a bit overpriced in my opinion.