Here is one of the must for my collection, next summer. Nine years have passed since the last City Service Station (7993), that unfortunately didn’t have the pleasure to achieve, and in my humblest opinion, it was definitely about time!

The new Gas Station is a City set that will hit markets next June during the second wave of 2016 releases. The piece count and prices are not known yet but I would bet something between four and five hundred pieces which puts it , theoretically, around the forty dollars, perhaps a bit more, which I think is quite fair for this awesome set. 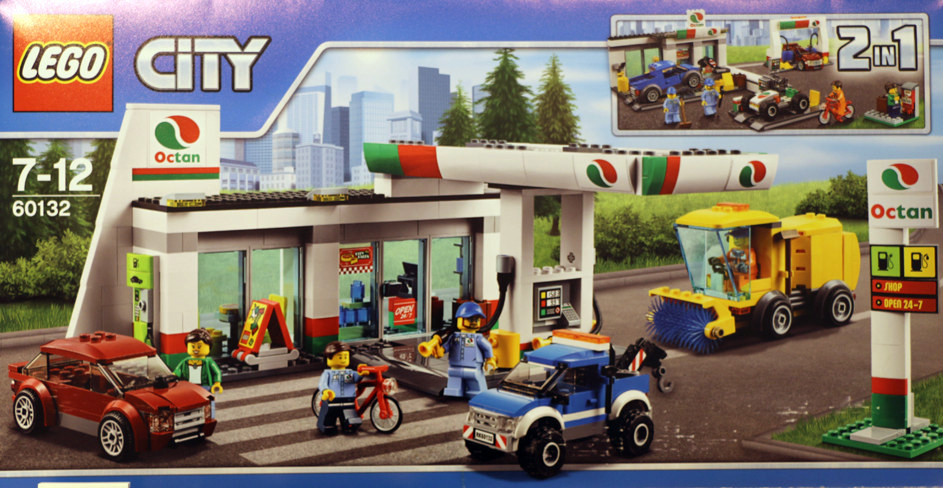 As you can see in the pictures, the set features the gas station which includes a small convenience store, three vehicles (a dark red car, a small tow truck and a street sweeper), an outdoor panel with the prices and four mini-figures (the gas station worker, the Sweeper Driver, the red car driver and a guy with a bike) with several different accessories.

Inside there isn’t much space but as far as I can see in the set box, it has the cash register terminal at the corner with a few more products, a small stand with some drinks and on the opposite corner, there’s a small area with a table and two chairs for the costumers. It’s not bad at all, according the space is not much!

In the outside, we can find the best part where the playability is huge. The refuel tanks area is attached, through the top, to the store giving it a pretty realistic look and at same time creates a limited area, next to the road, where the cars can stop and refuel. In terms of features the gas station has two pumps nicely details that include POS terminals, when in self service, a small garbage can and, at the corner, the drivers can see the tire pressure and attest the water level.

Two other major details are also fantastic. The first one is the height of the station ceiling where the big city trucks can also enter and refuel. The second is the unusual 2×1 building option that allows building an alternative workshop with a car washing machine and three different vehicles (a small truck, a convertible and an Octan ATV).

Back to the main model, there are also three nice vehicles: an always useful tow truck, a red car with some nice rims and a yellow sweeper which is absolutely a rare vehicle and an additional reason to achieve this set. In terms of mini-figures we can expect the usual, four guys nicely dress where I think that the Octan worker seem to have a new uniform.

Globally this is a must, for sure, not only for its beauty and playability but also because the last Gas station was released nine years ago, definitely too much time. The set will be available next June and honestly I can’t wait to get my hands in one of this. Enjoy the pictures!