What a great surprise! This is definitely one of the most interesting and different City sets of the last years, giving, not only to the Harbor but also to the city theme as well, a great wave of innovation which certainly is not easy in this theme.

The Ferry is a new 2016 set, with around three hundred pieces, that features the big long and yellow ferry boat (quit similar, I would say, in terms of design to some ship of several parts of the world), a nice red convertible and two mini-figures (the pilot and a lady for the car) with a few accessories.

The ship, according to the set box, measure exactly thirty four centimeters, and its built upon a few long plates that together with a few additional and transversal pieces, will be the base or the deck, if you prefer, of the ship. The side ”walls” are all yellow with a black bar on top, and built with plenty of small pieces, allowing that way to make or create all the possible and necessary angles, all over the ferry. 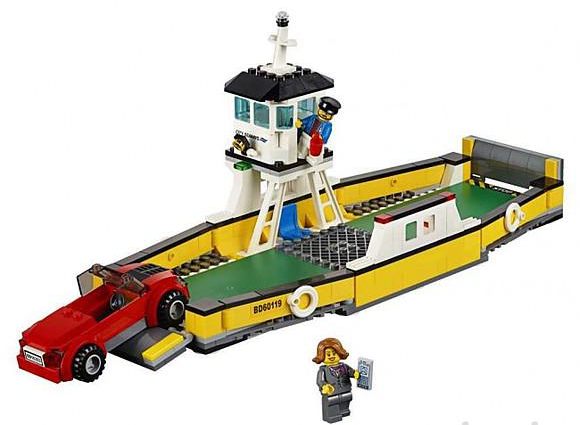 On both tops, there are two tipper ramps, in order for the cars to enter one side and out for the other. The floor, where the car will park, with exception of the middle in built with long green plates with no studs, which gives the ferry a very cool and realistic look. With a bit of luck, and picking small vehicle, I would say that is possible to transport three or four cars in the ferry.

On the right side of the ship, right in the middle, is placed the pilot’s cabin. Using also the side wall as a base, the square cabin is placed, as expected on a high level. Strangely there are no ladders for the pilot but inside there is certainly space not only for his seats and also for a few handles. With glass all around, he won’t surely complain about its view. 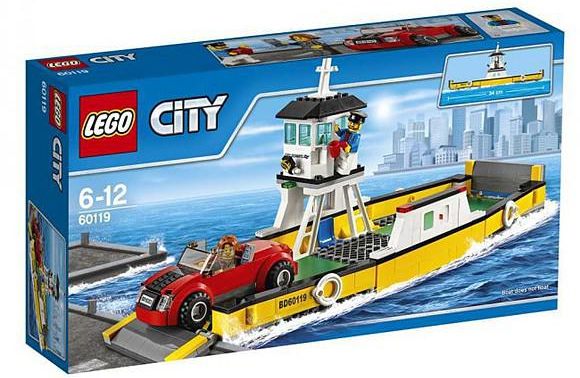 On top, there is also a small white tower which can be simultaneously a communication antenna and navigation light. The red convertible is quite similar to many other city cars, and shows a pretty nice design and all the features that these vehicles usually brings. The two figures are regular city guys with nice detailed suits.

Overall, this is surely a pleasant surprise and a must for the city fans. The ship looks fantastic and I would say that the playability is almost endless. Have you imagined for instance to put a big truck inside it? The set will be presumably available in the beginning of the year and should retail around the thirty five dollars.