The Fire Utility Truck is a new City Fire set that has been released in January. It has three hundred and sixty eight pieces and features a sturdy fire truck with a trailer, a satellite tower in flames and three mini-figures (a couple of fireman and a communication worker) with assorted tools that include axes, saws , a hammer and a screw driver.

I like this truck! It’s not very big and makes me remind some vintage vehicles that were a bit taller that they were supposed to. But in this case, the height is clearly influenced by the higher suspension that possibilities the vehicle to surpass most part of the obstacles and reach the emergency.

Generically however, it features most of the elements that many previous models have. At the front the hood is really small (and I like this detail!) and around there are plenty of traffic and emergency lights as well as a tow bar. Inside, there is the usual: a seat, the steering wheel, a yellow mug and gladly, to access it, a couple of doors.

Behind it, the truck shows a big compartment where the firemen can store their tools in a big box. And as I mentioned in the beginning, this time they seem to have plenty of them to work with!  At the back, there are also a couple of extra clips to store them, in case of need.

In the trailer, the playability continues with the big rescue ladder. As you can see in the pictures, it’s built over a round platform that turns the 360 and in addition it can be easily extended, assuming almost all the possible angles or positions. Next to the ladders there is also a hose to extinguish the fire. 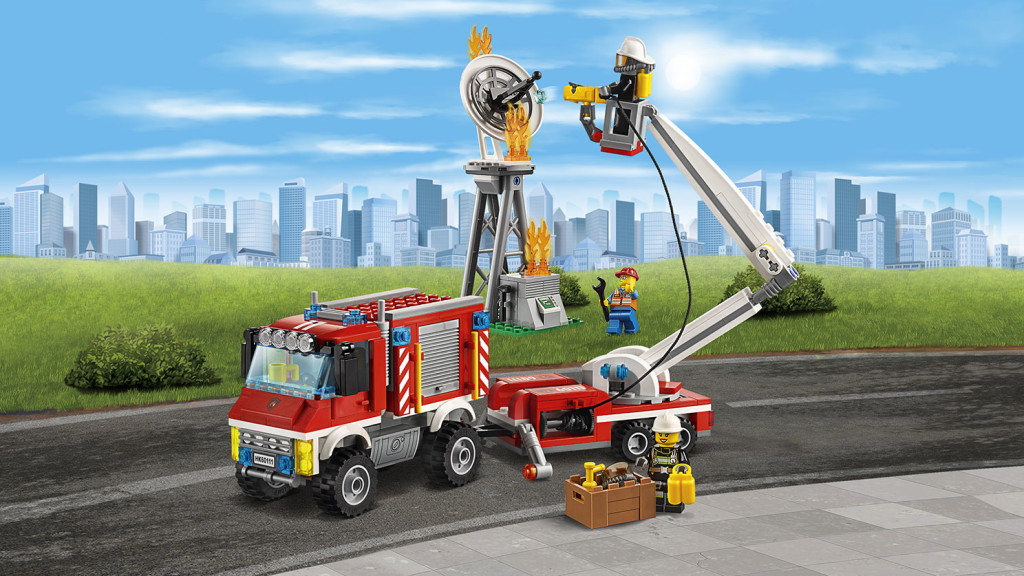 The satellite tower looks pretty cool with a control box in the base, and the several flames give the set a nice touch for a fire scenario. Overall it looks definitely a very interesting fire set. If you don’t have many fire vehicles, for around thirty five dollars, you’ll get a truck filled with plenty of nice features and three mini-figures with new suits. The set is already available on general retail, enjoy it!