Here is a set which I would certainly buy, if I had space for an extra fire station. This new City set is the biggest fire station of the last years with nine hundred and nineteen pieces that features besides the big building, a fire rescue truck, a small car, probably for the chief, a small helicopter, six mini-figures (five fireman and a civilian) with lots of accessories and finally an unusual hot-dog cart that unfortunately seems to be on fire.

The Headquarters is definitely fantastic. As you can see, it is constituted by three different elements, two garages of different sizes, one on each side and, in the center, the building with three floors.

The ground floor has a nice entrance with a revolving door that is always pleasant to see and to play with. Inside, there is space for a water machine and a small seat. Up to the first floor, we find the control room that includes a desk with a computer and, near the wall, a big screen with a detailed map. Finally on top, there a resting room with two beds. On both floors one of the windows has no glass, allowing to firemen, in case of emergency, to slide easily through the yellow pump.

The smallest garage has the appropriate space for the car but the fact of not having a back wall, allows that bigger cars can be parked inside with the front door closed that, as expected, is similar to previous city sets. In the front, there is also a small door and a rack with lots of tool can be found on the opposite side. On the roof a big satellite dish ensures all the necessary communications.

The truck’s garage is the biggest and being pretty similar to others, shows a few interesting new details. The structure is the usual, lots of columns all around, a gate at the front and lots of space inside. However, besides to small ramp at the front for a better access (the garage 1 also has it…), it has on the roof a nice heliport with the exact space for a helicopter. Overall there are emergency lights, spotlights and speakers everywhere that gives the building a nice realistic look.

Having a look at the vehicles, the rescue truck is perhaps one of my favorites of the least years. The cabin is rather similar to so many others, luckily it shows two side doors and inside there is space for the seat and the steering wheel that this time seem to be on the left side of the cab. Honestly, the grid is a bit ugly, but in order to forget it, just above the doors, there is a small step for the driver which for me is the first time that I see that. Definitely very nice, this detail!

The chassis is pretty long and has space not only for a rotating platform that turns all around but for some big ladders that I don’t remember to see since the 7945 model. Made with technique pieces, the ladders can easily be expanded to a high of almost fifty centimeters which is awesome in terms of playability. In addition, the truck has on its left size a big hose and a small compartment to store some tools. 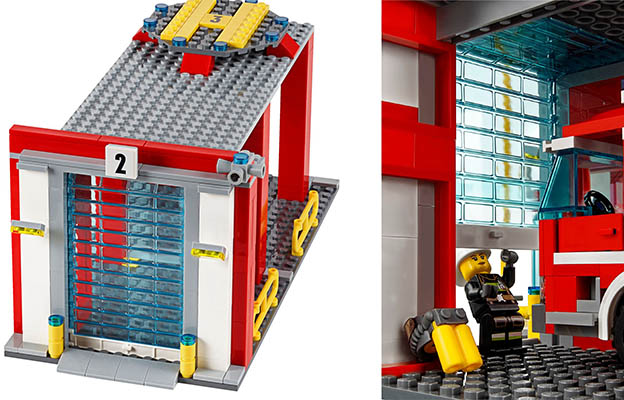 The chief’s car as you can see in the pictures is quite small and is just a regular city car, painted red with the essential elements that included rear mirrors near the doors. It shows also plenty of stickers that I would certainly pass. The Helicopter, just like the car, is one of the smallest models but this time I think that there were some concerns of adding it some new details. The windshield and the landing gear are the same but for instance, there are some new elements in the engine that also include a couple of blue lights and aside the pilot there’s a small stud shooter that intends to through some water from the yellow tank placed just behind the pilot.

Overall, this is absolutely a must in terms of beauty and playability. The biggest fire station of the last year shows a really nice building and a huge truck that will certainly provide some endless hours of fun. The firemen present new uniforms and are always a good addition to any city. The set should hit stores next month with a retail price around the ninety dollars.