The Fire Ladder Truck is a new fire vehicle with two hundred and forteen pieces that will soon hit stores, just like the rest of the first 2016 city wave. This pretty fire set features besides the vehicle, two fire fighters (a couple) and a few small accessories such as a fire tank in flames and a couple of walkie-talkies and extinguishers.

Three years have passed since the last wave of fire sets, so I think that there was a bit of curiosity about what was coming up, and looking at the first images, I would say that there are reasons to be happy.

And one of the motives is this truck. It’s not very big but it has a lot to enjoy and will definitely be a nice addition to the new Fire station. Looking at the vehicle, it shows at the front a big double cabin with space for the two mini-figures and I’m starting noticing that there are two tendencies for next year: there won’t be side door in the cabins and the steering wheel will be placed right in the middle.

The ladders are built up on rotating platform and use a small technic structure to raise and lower. The final result should be as expected, pretty similar to other previous fire vehicle. Below the truck’s bed and next to the back wheels, there is also a long coiled hose with a new feature: a stud shooter, that can be fixed in the back of the cab, that intends to simulate the water jet. 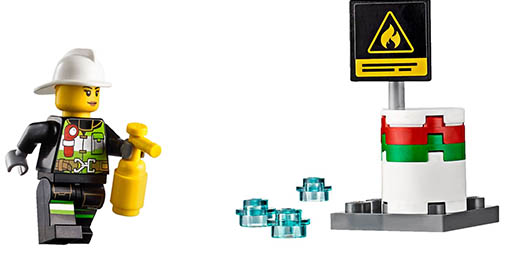 Finally the worst part, in my opinion! How can a cool ladder truck such as this one, have an ugly front like that? If the front lights are just average, what can I say about the engine’s grid? A sticker? Well, that won’t be for me for sure, there were certainly better options! Globally if we forget this appointment, it’s definitely a very cool truck with lots of playability and two fire fighters with accurate suits. The set should retails around the twenty dollars next January.