Among so many great photos from the 2015 Nuremberg Toy fair, this new city set has caught my attention for sure. The new Town Square is big, very big (the exact piece count isn’t known for now…) and brings a lot of really nice vehicles and building to enjoy and guess what, fourteen mini-figures , which makes this set clearly much bigger than other previous versions.

The complete list includes an orange tram with three carriages which will possibly get the bigger attention, a small Lego Store with a delivery van, a garage with a tow truck and three cars, a coffee shop, a tram station, a blue helicopter and two other minor elements such a pizza delivery motorcycle and an ice cream cart. 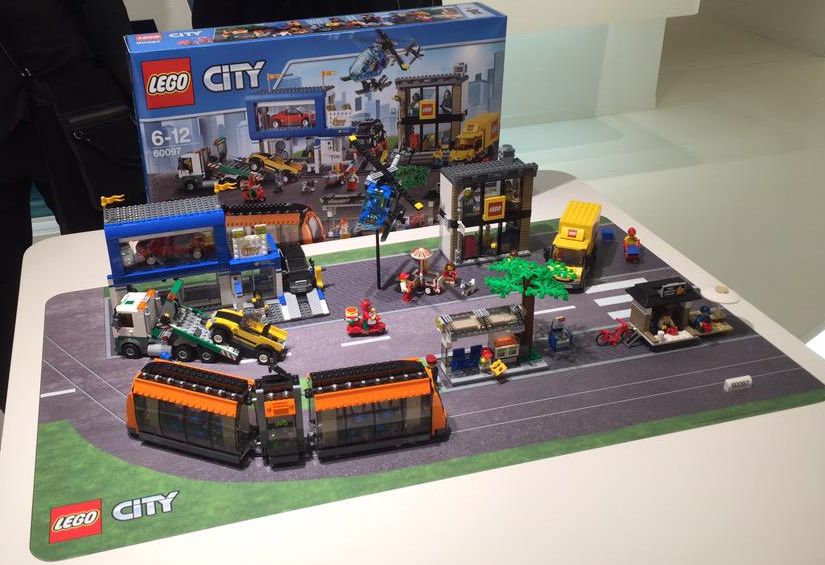 Having a quick look through the images, the garage has two different windows for the new car’s exhibition, a room to receive the costumers and even a small workshop for the broken vehicles. The breakdown truck, built mostly with green and white shades, has a dump flat bed which is absolutely a great feature in terms of playability and the three small cars seem pretty nice in terms of design with especial relevance for the two convertibles. Once these guys seem to sell new vehicles, I guess that the auto transporter truck (60060) will interact perfectly with this part of the set.

The Lego store has two floors and seems to be completely open at the back. The delivery truck that isn’t particularly bigger is once again made with yellow bricks and seems to be able to transport a considerable number of boxes at the back. In terms of the building’s interior it isn’t possible for know to see what the guys are selling. 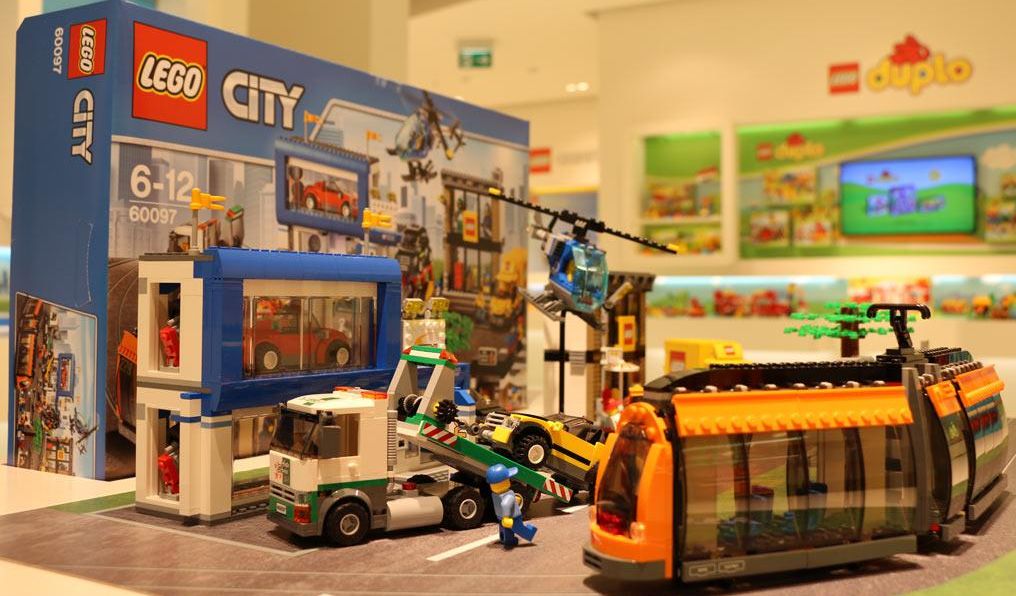 The tram looks absolutely great with plenty of dark glass everywhere. Each one of the two main carriages has three seats for the passengers and a nice cabin for the driver. The central car is quite small compared with the others and has a sticker with a bicycle which suggests that this car is prepared to transport safely a couple of bicycles. I surely hope that this train would be compatible with the city railways.

The tram stop is very pleasant and besides the usual stuff, it has also a big tree at a corner. The building itself seem to have two seats for the passengers, some drink machines next to them and perhaps a newspaper delivery. Finally as it concerns to the buildings, the coffee kiosk has besides the small shop, a nice esplanade for the costumers that include a table with seats and a big sunshade.

Globally, this is definitely a must for the city lovers. The potential in terms of playability is endless and this time I guess that all the elements are especially well conceived. The fourteen mini-figures seem a “big army” but are easily justified by the big number of vehicles and buildings that are present in the set. Now prepare for the worst which is definitely the price. It’s impossible to give a hint without knowing its piece count but rumors mention something around the hundred and sixty dollars which is definitely a considerable amount. As a conclusion, I can’t wait to get my hands on it!!