Here comes another city Helicopter, this time from the new 20150 city sub theme, the Deep Sea Exploration. The set has almost four hundred pieces and features an Exploration helicopter, a mini-submarine, a shark, three mini-figures (a pilot, and two divers) and some additional accessories like a box with precious jewels.

First of all and despite the great features that it brings, I must say that this heli is not one of my favorites in terms of design. The double propeller and the straight back definitely didn’t convince me at all. 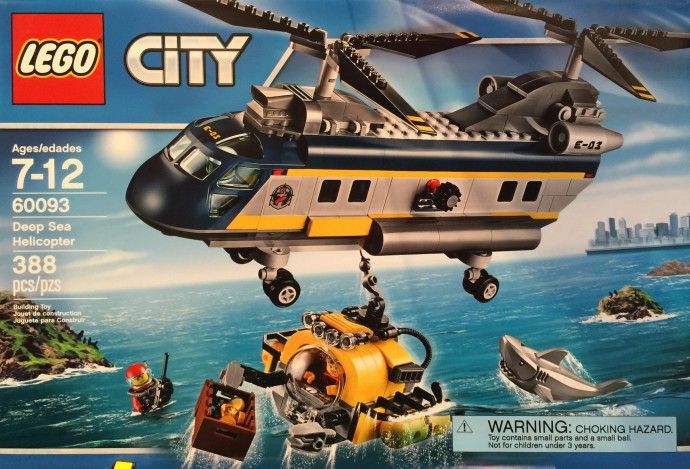 The color scheme seems at the first glance, a bit close to the Police, however it looks pretty nice, mixing the two yellow lines with dark blue and white bricks. The cockpit looks similar to other models but the couple of windows aside the pilot suggest that that might be a new brick at the front. Inside there’s only space for the seat and a couple of handlers.

Behind the cockpit, it’s clear that there are several windows all around, however there isn’t a single door which might indicate one of two things: that there is a big door at the back or that the entire roof is easily detachable from the rest of the structure. In the middle there’s also a small knob that triggers and controls a winch that will be responsible to bring down into the water the small submarine. 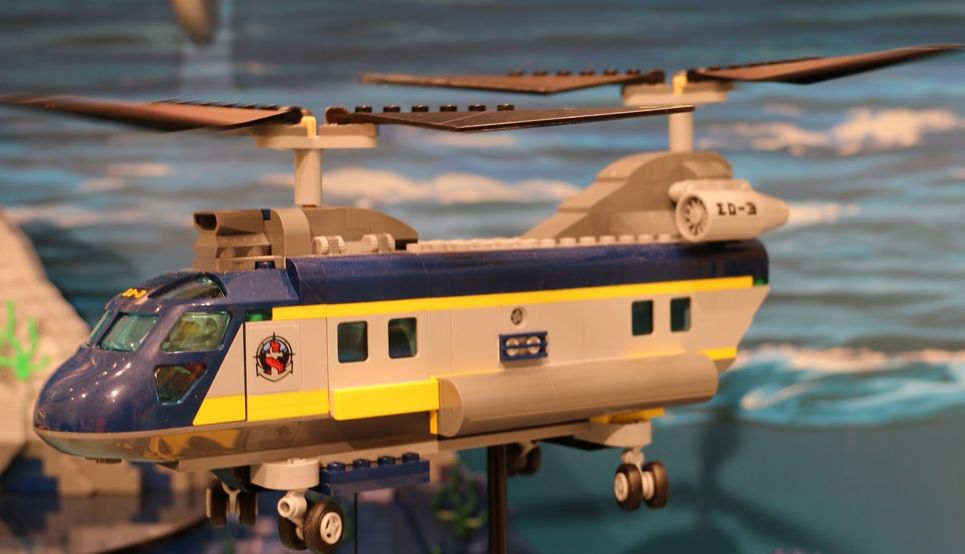 The landing gear has four wheels and all of them turn 360 degrees which makes quite easy all the maneuvers when the heli is on the ground. On the top the two propellers are similar and built with easy techniques. I especially enjoy in this part, the two engines, placed aside the back propeller.

The yellow sub is definitely really cool. It’s not very big but looks very detailed and with sufficient space inside for the divers. Outside among other things , is possible to see a couple of oxygen bottles, four powerful spotlights and best of all a couple of claws that will easily grab the brown box.

The mini-figures are similar to rest of the theme, however they’re surely a great addition to the collection featuring some cool accessories. Overall if you’re not sick of helis, this looks an interesting exploration set with lots of potential in terms of playability. The Helicopter, despite my doubts in terms of design, brings some nice features, as well as the sub, and the price that will certainly be in line with the rest of the theme, should retail around the forty dollars.