It’s not the most enthusiastic set, however is a good opportunity to get some extra fire man mini-figures and additional elements for the town at a reasonable price. This Fire starter set has around ninety bricks and brings four mini-figures (two fire fighters, the fire fighters’ chief and a mechanic), a fire ATV and a small gas station in flames.

The Fire vehicle is probably one of the smallest that Lego has ever released, but in such a small vehicle it is possible to find a tow bar at the front, some handlers for the driver, that in the picture it is possible to see that is a lady and even a protection grid at the back for her safety.

The four mini-figures seem nicely detailed, the mechanic has a new blue suit, the fireman are fully equipped to fight the fire, their new dark read helmet looks very cool and finally the boss with a white shirt seem to be there only to give orders…

The small pump is also a good additional element most of all because, despite being in flames, it keeps all the entire structure (the control panel and the garbage van are still intact…) which makes it a good opportunity to fill in any empty space in the town. A gas station is always welcome! 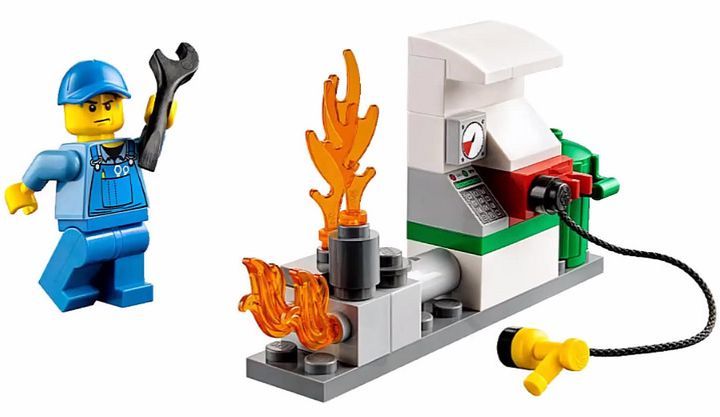 Ten dollars for all this seem definitely a must. A set with four accurate mini-figures, a small vehicle and a gas station for that value doesn’t appear every year! With a release date scheduled to January it’s will probably hit stores next Christmas. Enjoy the gallery!