The name says everything. The new Lego City Starter set, that will be available next January, brings a good alternative for those who now get contact with Lego or a good way to get a few additional city vehicles for an attractive price.

The set brings a total of two hundred and forty two pieces and features four vehicles: a fire rescue boat, an ambulance helicopter, a small Police ATV with a trailer and a water bike, an inflatable boat and five mini-figures: a thief, a police officer, two fireman and a pilot for the heli.

The helicopter has a simple cockpit with a long windshield and a single handle inside. The landing gear has two big yellow floaters that allow it landing on water every time is necessary. One of the floaters is also the base of a stretcher but I think that it won’t be pleasant at all to be transported in there.

The fire boat is also an old and usual fire vehicle, present on many city sets. With the traditional red base, it has an interesting cockpit in the middle, this time with a round windshield and a small roof to protect from the sun and rain. The boat also brings a single but powerful engine at the back and a nice water cannon at the bow. 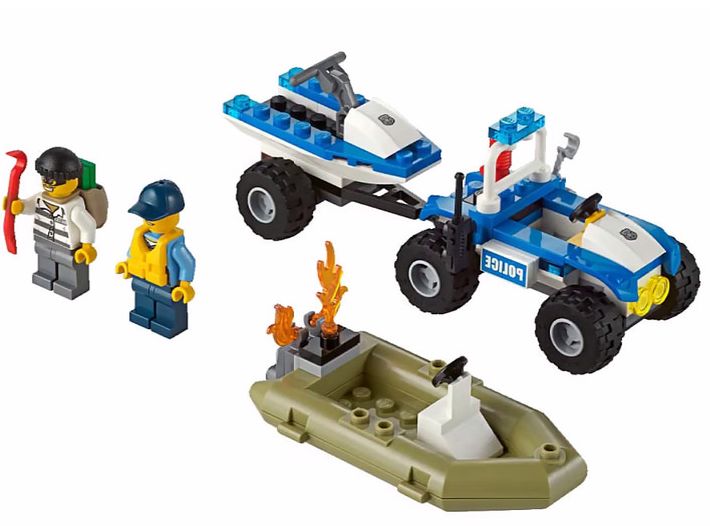 The Police vehicle, which is perhaps the best in terms of playability, is also very simple and quite similar to other city ATV’s despite a few changes in terms of design. Finally, it looks like that the thief had bad luck with its engine and won’t go very far without being caught by the police and by the fire rescue boat!

Twenty five dollar for all these vehicles and five mini-figures don’t look bad at all. Personally I’ll pass this starter set, as well as the others, but I’m sure that it will definitely be a nice opportunity to start enjoying this theme! Have a look at the gallery: