The Racing Bike Transporter belongs to the new city wave of sets that will be available next January. With hundred and seventy eight pieces, it brings a new van with a trailer, two racing motorcycles, a couple of mini-figures (two pilots), a podium with a trophy and a few additional accessories like the couple of helmets for the race and some tools to fix the bikes.

Starting by the truck, I must say that I don’t really like that new grid at the front. I know that the vehicles can’t have the same details every time but in my humble opinion this time the van’s front is a bit ugly.

Gladly it’s the only part that I don’t like in the car because all the other stuff looks pretty cool. The color scheme couldn’t be better, with a mix of red in the bottom and black on top, divided by a white line. This time, the several stickers that are all around are pretty nice and give the van a really racing look.

The cab, at the front, seems to be as usual: six studs wide provide enough space for the pilots, a steering wheel and a white coffee cup. Accessing the interior is also very easy thanks to the usual small side doors that this time are accompanied by two rear mirrors. Just behind it, the trunk shows a central bar capable of transporting one of the bikes in safety.

The images are not clear but I think that in the back, there’s no kind of door or ramp for the bike so probably the guys will have to carry it up onto the van. On the contrary the small trailer has two movable ramps and features a small support in the middle, enough to hold the bike when in movement. 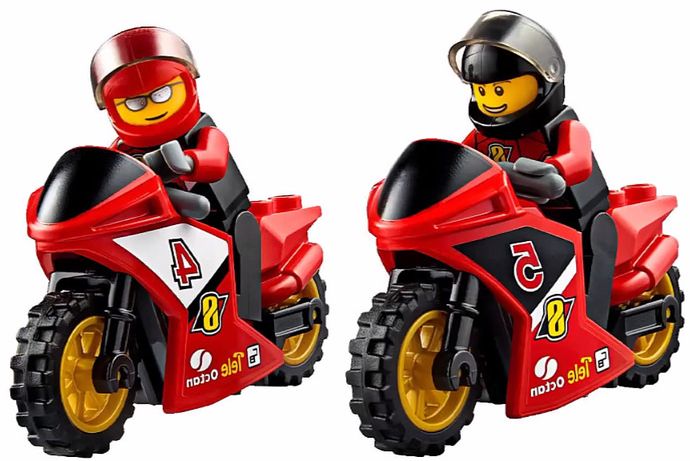 The red bikes have a new design with aerodynamic lines and a good driving position for the pilots. The golden wheels and the stickers are also a positive point in these racing machines. The mini-figs look really cool wearing suites with the team’s colors, red and black, having also the possibility to change between the helmets and hats.

Overall I think that my displeasure with the van’s grid is not sufficient to consider this set a bad option, far away from that. Forgetting it, the van looks rather cool and together with the bikes provides a good wave of playability. For twenty dollars is definitely a truly successor of the dirt bike transporter. Have a look at the gallery!