I’m quite curious about this city truck and almost for sure ,it will be one of my next acquisitions as soon as it’s available. The new Snowplow Truck is a new city set with a bit less than two hundred pieces that brings besides the snow truck, a city worker with a brown broom and a shovel and lots of snow studs.

In terms of beauty, I must confess that is not one of the prettiest models but it’s definitely a very useful vehicle for my town. I don’t remember any similar model that has possibly been released in the past years, so this Snow Plow Truck will fit there, perfectly with no similar rival around.

The vehicle, as you can see, has a raised suspension with big tires that use bars to be attached to the suspension. The green cab isn’t much different from the usual, having inside a black seat, the steering wheel and a red cup. Besides the usual traffic lights, the windshield has also four additional spot lights in case of poor visibility.

Just behind it, the orange compartment has lots of space to carry stuff and my only doubt is if it carries the snow blades. The snow blades, as you can see in the pics, are the main attraction of this truck and can be easily attached at the front. Built with several orange pieces it has four additional lights on top and can assume multiple positions cleaning all the snow wherever it passes. 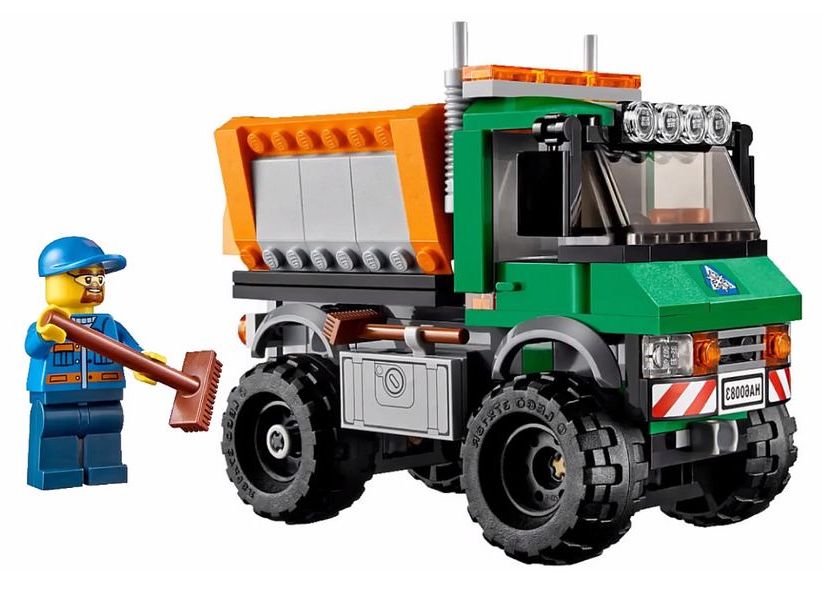 Overall, this looks a really nice vehicle. Being an unusual truck it will definitely a good addition to any collection. In terms of value for money I regret the fact that it has only one mini-figure but I think that it won’t be reason enough for not buying it. As always in this set’s size, I ‘m expecting something around the twenty dollars! Have a look at the gallery!