Belonging to new subtheme, space exploration, the Spaceport is a new city set with almost six hundred pieces which makes it, until this moment, the head set of this new space wave. And as usual there’s a lot of stuff to play with.

This big set features a very interesting mobile launching platform, a space shuttle with a big powerful structure that includes two big fuel tanks and a couple of rocket boosters, a ground vehicle, five mini-figures (two astronauts, two ground workers and a scientist) and a couple of additional accessories such as a countdown display and a communication tower.

First of all, let me tell you that I love this shuttle. It looks awesome in terms of design and I think that it has the right size in terms of handling and playability. At the front, the nose is easily detachable, giving access to the cockpit’s interior (which isn’t very big…) and all its panels and handlers.

Just behind it, in the middle, the big white doors can also be easily opened, showing a cargo compartment with a big satellite, stuck by a yellow arm that can easily come out the ship in different positions. The wings are, as usual, considerably big (if we consider the shuttle’s size) and show some really nice flaps on the edges. At the back there is probably my favorite part, the big engines with two awesome exhausters with lots of orange studs that give them a really powerful look.

The mobile platform looks pretty simple in terms of structure and uses mostly technique pieces to ensure the necessary sturdiness. The driver’s cabin in the corner looks pretty unusual but quite realistic at the same time. In the middle, three long (and known…) pieces are responsible to put the space ship and the launch rockets on a vertical position. These, as well as the fuel tanks, use big cylindrical pieces and on strategic places, a few pins ensure the correct attachment of the space ship. 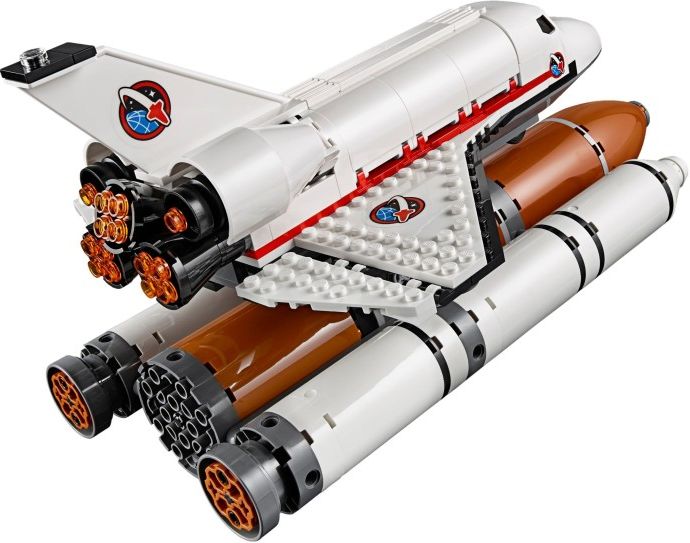 Having a look at the ground vehicle, it has three seats for the driver and the two astronauts. At the back, just behind the yellow protection bar, a couple of clips allow to safely transport the helmets and also the bigger astronaut suits. The mini-figures once again look nicely detailed, especially if we attempt at their torsos, and of course the astronauts are always an added value to any mini-figure collection.

Overall, it’s definitely a fantastic space set with a bunch of stuff to enjoy. The space shuttle is awesome in terms of design and playability, and the mobile platform surely is a unique element and a must if you want to build a space center. The set should be available in august with a retail price around the seventy dollars.