The Hovercraft Arrest is a new 2015 city that makes part of the new Swamp Police sub theme. With exactly three hundred and thirty one pieces it features a really nice Police Hovercraft, a tree house, an off road van and three mini-figures: a couple of robbers and a Swamp Police officer.

I think that is almost unanimous that the hovercraft assumes all the leadership in the set. It is bigger, it looks beautiful, all the major parts are very well designed and it definitely has some nice elements to play with. First of the entire inflatable basis, built with many small curved bricks, is quite well recreated giving all the look of being filled with air.

The cockpit seems slightly lowered but at the same time very large and with space for an extra seat. Inside, the pilot has at the front the traditional steering wheel and an aerodynamic windshield for its protection and at the back a couple of clips holds two antennas with blue emergency lights. Aside it, there are also a couple of lights and two clips for the handcuffs. At the back the propellers seem pretty nice, giving the boat the appropriate power to navigate in the swamp. 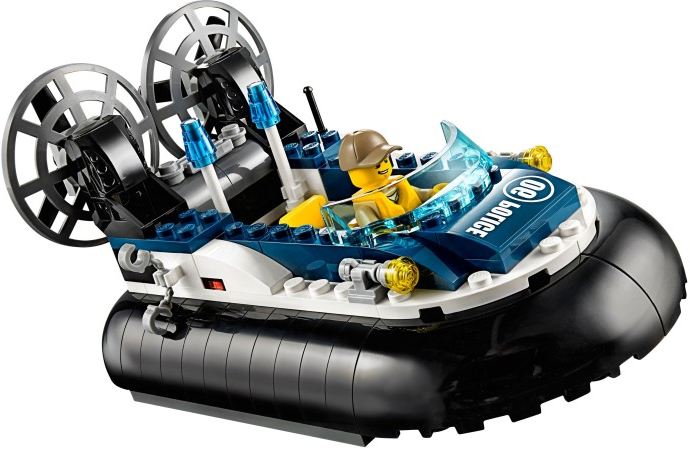 The tree house is built up on a green plate and a large trunk with plenty of sloped pieces and four big branches. In the back we can see that, in the floor, it is possible to hide a big box with the stolen money and access to the first level through a black ladder that lead to a small division with several color shades. Once here, there is space only for a small lamp and a coffee mug.

Having a look at the off road vehicle, I think that it mixes the usual design of city vans with a few sixty’s details such as for instance the big engine’s hood at the front. The triple wheel axle with caterpillars looks really nice and gives the vehicle the image of being capable of surpassing any obstacle in the swamp. 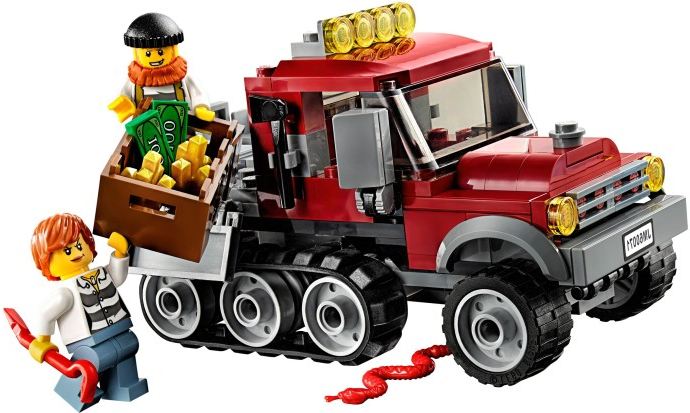 As a consequence the chassis is slightly raised as well as the cab that is pretty similar to the usual standards. The roof has four extra lights for a better vision and just aside the driver there are two clips to store tools. At the back, the trunk has the exact space to transport the stolen money that can be easily carried just by opening any of the three trunk doors. The mini-figures, despite being usual city guys, seem to bring a few interesting details such as the beard on one of the thieves or the fact that one of them, this time, is a lady.

Overall, despite the bunch of police sets that Lego present the fans every year, I think that this one brings a few different things, namely the two unusual vehicles. The tree house seems also a good addition and even the expected retail price, around the thirty five dollars seems tempting. Have a look at all these details in the gallery: