The Robber Swamp Hideout is a new Police Swamp set that will hit stores next January. It looks big and features an abandoned building built upon a small harbor, a couple of boats, a small helicopter, a Police vehicle, five mini-figures (an officer, the heli’s pilot, and three thieves) and a few additional elements such as small cart with the stolen safe.

Starting by the hideout, I definitely like this small house! First of all because of the harbor that shows some interesting details (the old tree in the corner couldn’t be better!) but also because it will allow plenty of interaction with other sets. 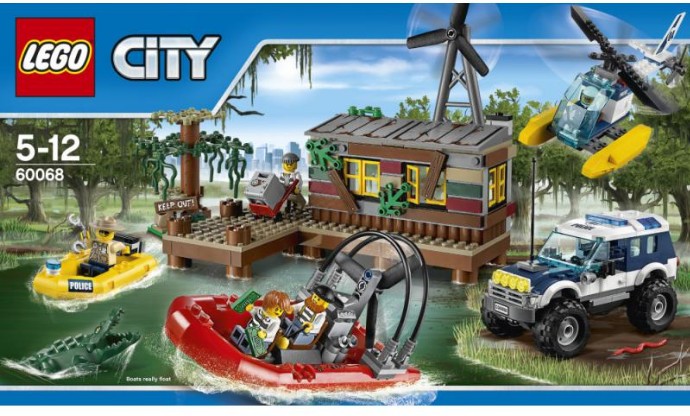 The building seems very simple,only with empty walls, however at the same time it can show same really interesting details. The big mill at the back and the chimney look really nice, the crossed boards as well as the stickers in the roof improve the abandoned look, and the boards with different colors, at the front wall, are also pretty good in terms color scheme.

The Police SUV seems quite sturdy with those big extra large wheels and a raised suspension. At the front, the hood brings four powerful lights and a big antenna placed next to the windshield. Inside the cockpit has the usual, a seat for the cop, a steering wheel and a couple of side doors. With access from the interior, the back compartment has more than enough space for at least a couple of crooks. Finally the roof has, just like all the police vehicles, a few emergency lights, however four of them are placed on the edges in a new position.

Looking at the sky, the small heli is similar to many other city helicopters with the major different of having a couple of yellow floaters that allows it to land in the swamp waters. The cockpit is protected only with a long windshield that opens widely and inside the pilot besides the seat has only the usual handlers to maneuver the vehicle. 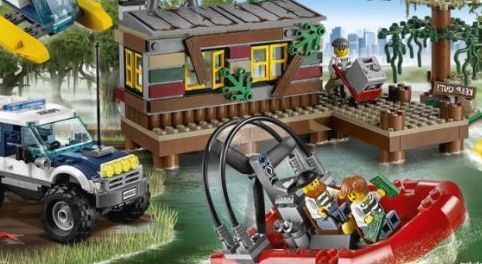 The boats aren’t new, however both have some unusual details. The bigger, the red one belongs to the crocks, has at the back a big propeller among two long arches. In the middle there’s a seat and some handlers to start the escape with the money, and just in front of it, at the pope, there is even space for an extra seat.

The yellow boat is clearly smaller and definitely will have some problems to chase the crocks. The usual city boat that most of the times is upon the trailer, has an improved engine but looking at its size I don’t think that it will be enough to catch the robbers.

Overall this looks a set with huge potential in terms of playability. The hideout looks pretty cool, the five mini-figures aren’t properly new but bring some new interesting details and the four swamp vehicles will certainly provide a lot of fun. Unfortunately for now there are no details about its real size or price but through the set box picture it’s possible to see that won’t be cheap!