I think that there isn’t a single city wave that doesn’t bring a new helicopter! And this one follows the rule, presenting the new Swamp Police Helicopter Pursuit. This new city set features a blue helicopter, a red high-speed boat with a crocodile’s muzzle, three mini-figures (a couple of officers and a thief), a small island and a crocodile, among a total of two hundred and fifty three pieces.

The Helicopter in terms of design doesn’t look much different from previous models, released in the past couple of years. The cockpit with those little windows is the same as well as the one’s just behind them, which is not a bad thing, far away from that, simply it’s not an innovation.

However, there are at least a couple of interesting details that surely caught my attention: the dark blue color which not only looks pretty nice but also is definitely a standard for this new Police Swamp, and of course the landing gear with a couple of big yellow floaters that will allow easily the heli landing on water.

There is no kind of images, for now, from its interior but I’m sure that we’ll find a couple of handlers and a seat for the pilot. Behind the cockpit there is a bigger compartment with room for the second officer and for the thief if he gets caught. The side door together with the landing floaters’ structure allows the Police to attach a chain and “fly” to grab the thief!

On top we can see a big engine with six propellers that seem to occupy all the heli’s top so, most probably, if you want to access the cockpit you’ll have to detach most of the engine elements, which is not very pleasant in terms of playability. 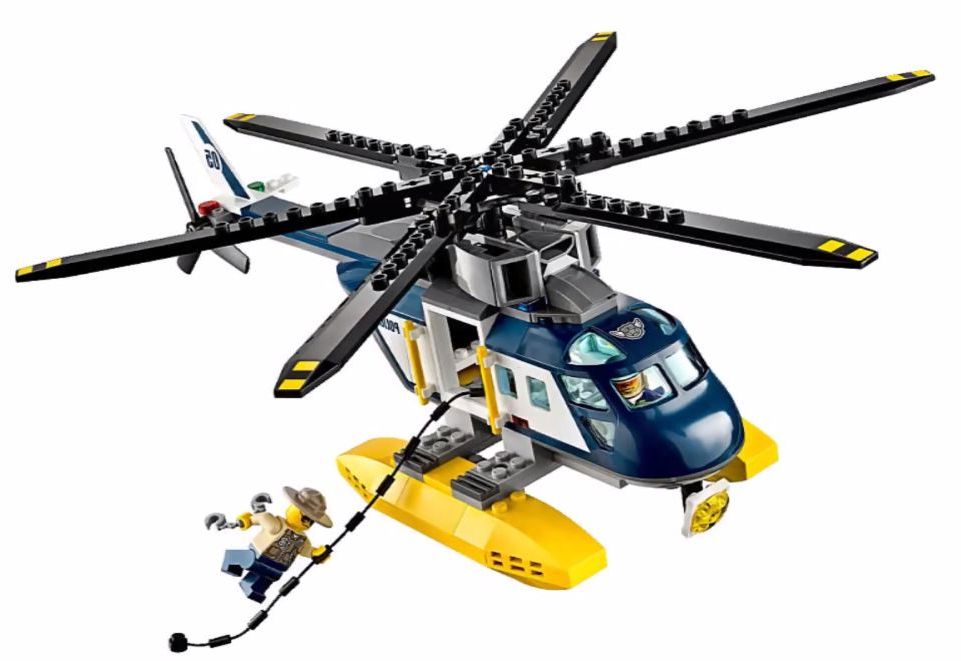 Having a look at the thief’s high speed boat, the first impressions couldn’t be better. With a small windshield, it looks quite aerodynamic and together with the couple of engines at the back, it will surely difficult the officer’s job in order to get the robber. Finally there’s only one thing that I wouldn’t do: put the teeth stickers at the front, personally I don’t like them there (are they printed?? I don’t think so…)!

Overall all, it seems an interesting thirty dollars set. The three mini-figures look nice, the thief even has a new hair cut, the helicopter besides its beauty has also some interesting stuff to play with and of course the high speed boat with the shapes of a crocodile is also an added value in terms of playability! Enjoy the gallery!