The ATV Patrol is an entry set of the new City Swamp Police sub-theme. This small set brings only fifty nice pieces which is enough to build the Police ATV, two mini-figures (a Swamp Police officer and a thief) and an island with a red snake, covered with bushes to once again store the stolen money.

This isn’t properly a must in terms of innovation, however I think that it looks a good opportunity to get some figures and an additional police vehicle for a friendly price. The ATV is similar to many other city vehicles, but there are always some new details to enjoy. 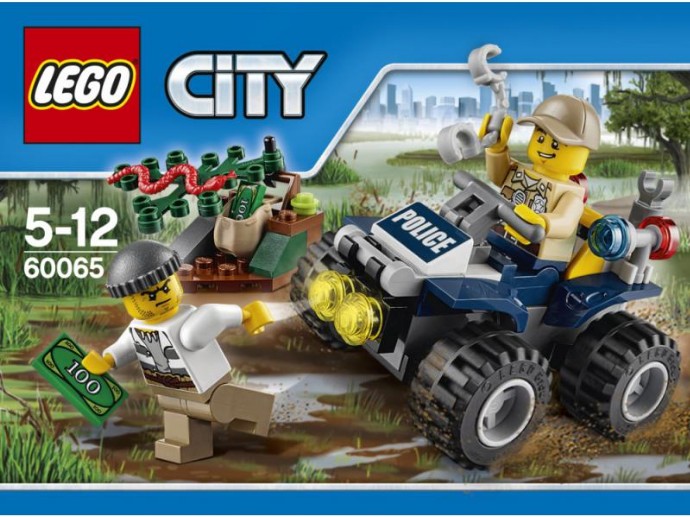 In addition to the usual structure, this time, there are a couple of new front lights, a clip with a red and blue lights aside the driving seat (yes, this time there’s a seat!), and an extra upstanding clip, at the back, to store the handcuffs. The island with the money isn’t big but it has space to hide the money between the bushes.

The mini-figures aren’t properly new, the swamp officers look quite similar to the 2013 Forest Police, but both mini-figures seem to bring new uniforms, in particular the crook. Overall for six dollars, it looks absolutely a nice deal and without needing more cops or crooks in my town, for the price, I think that I won’t miss the set.