The new Airport Fire Truck is above all a new addition to my Airport. It’s been a while since the last yellow brother (7891), which unfortunately I missed, and this new great vehicle definitely looks a truly successor.

Just as fat as the previous model, it is eight studs wide (it might not be easy to play with it outside the airport…) and keeps all the lines of this type of rescue vehicles as well as its functionalities. The set has exactly three hundred and twenty six pieces and besides the airport vehicle, it also includes two firemen with special equipment, a plane motor in flames and a box with tools for the guys.

Being a specific vehicle, it has a lot of features that can only be found in airport vehicles. First of all its engine is probably placed at the back, giving space at the front for a big cabin with space for the two firemen. The couple of individual windshields are only stuck to the roof which easily opens giving total access to the interior which is absolutely great in terms of playability. On the other hand, and in terms of chassis, it has clearly a completely different structure with a couple of twin axes with tires slightly bigger than the usual.

Behind the cab, and all along the truck, there are at least four compartments (the two at the back are considerably bigger…) to store equipment being one of them ideal to store the yellow box. Between them a big hose with a small control panel (the same of many other city sets…) is stored and ready to be unrolled to extinguish the fire.

But the fun doesn’t end here because for one hand, in the top of the roof there is a big water cannon that rotates the entire round in order to stop the fire no matter the truck’s position and just behind it a big tap seems to control the water flow. On the other hand at the back, truck besides the bunch of usual lights has also an additional rack to store more equipment. 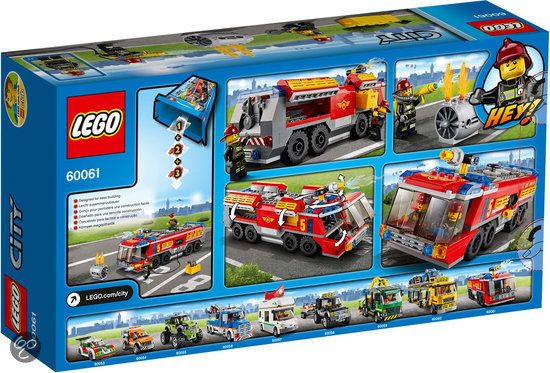 Overall it’s a very interesting vehicle different from everything I would say. If you have an airport I would say then that set is a must even if you have the 2006 model. It will soon be available on retail and according to the piece quantity it won’t be far from the thirty five dollars.