The cargo sets definitely will appreciate this new addition. The Logging Truck is a city set with two hundred and twenty eight pieces that features a great truck with plenty of stuff to play, including a nice yellow crane at the back of the vehicle, two small trees and two mini-figures (a couple of lumberjacks).

This new Truck is absolutely interesting despite its cabin is similar to dozens of models. Inside there is basically the same, the small doors are also included this time but if we look closely there are a few new details such as the new grid at the front, the couple of steps to climb for the interior, the orange lights at the back and finally the grill on the roof, probably to protect the cab from undesirable accidents!

The chassis looks basically the same with a flat bed behind the cabin, ideal for transport the couple of logs. Four black bars, two in each side, and a bigger barrier at the back, next to the crane will ensure that the wood once loaded, keeps the correct balance and position for a safe trip.

At the back of the truck is where almost all the fun is installed. The yellow crane, that is slightly raised, has an articulated arm that can easily assume multiple positions and also is able to rotate all around in order to grab the big logs and put them on top of the truck. The maneuver cab, that includes a blue seat and a couple of handlers, is placed on top and the claws, particularly, are easily controlled through a small knob placed in the middle of the yellow arm. Finally a couple of chains placed on the top of the black bars, ensure that in case of accident, the logs won’t fall from the truck through the top. 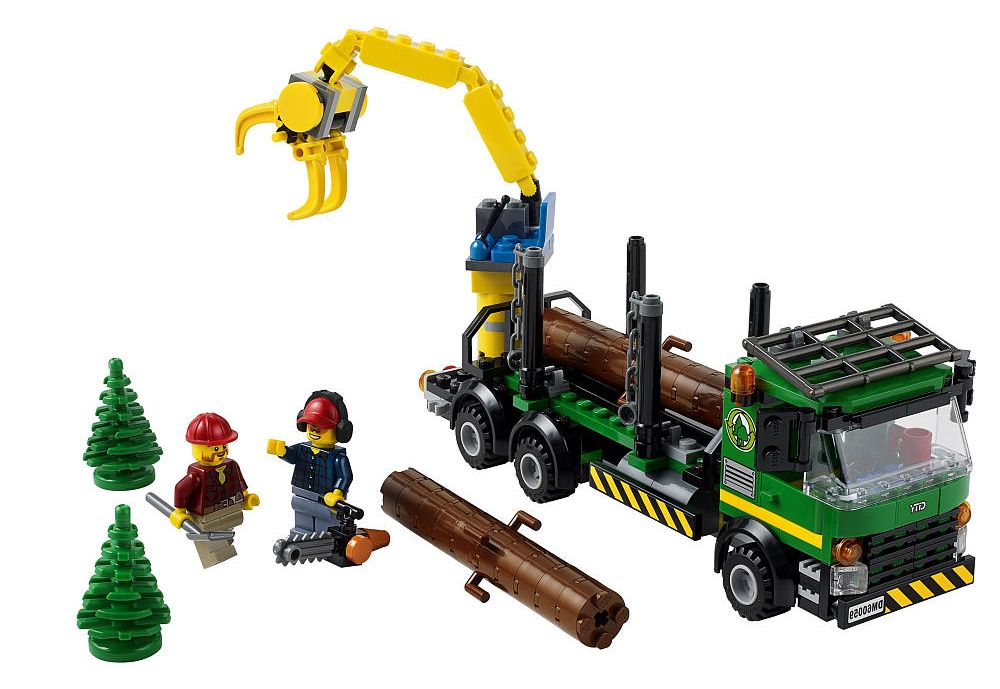 Overall this is surely a great addition to the cargo team. The truck, quite unusual, looks really nice with plenty of functionality where the crane is obviously the cherry on the top of the cake. The couple of lumberjacks and the two trees seem also an added value for this set that according to its size will probably retail around the twenty five dollars. Have a look at the gallery and enjoy the pictures!