The Suv with Watercraft is another city great vehicle that will hit stores next January, but for now this is probably one of the releases that I was less impressed with. Don’t stay with the idea that this is not a good set, far away from that, but if we look at the past years there are lots of Suvs, Jeeps and water bikes for all kinds, so this new transporter seems a sort of déjà vu.

With two hundred and nineteen pieces, the box features a nice black Suv and its trailer with some additional tools (that seem to be a fuel tank and an oil can), two new water bikes where the only difference is the color and two mini-figures that looking at their face will surely spend a nice time inside the water.

Having a close look at the Suv, it’s almost impossible not to think in similar models such as for instance the 7635 4WD Jeep. The big tires, the raised suspension and the long hood are absolutely similar features but these are precisely the ones that give to the vehicle the details that make it almost equal to the real world Suv’s.

Inside, there is the usual, the six studs wide allow the passengers to travel comfortably, however I think that the driver deserved a better seat. There are no side doors in this model which is a rarity in the 2014 models and just behind the cockpit it is possible to see an open space probably to store the water equipment such as the life jackets.

The trailer looks also built with the usual structure that includes the smaller wheels. However I would say that the flat platform looks really good to transport the watercrafts and in this moment, my only doubt is if in the limit it can carry the two bikes. Finally the bikes look pretty nice and as I can see they have a new design. The front is nicely aerodynamic, the handlers are also in a lower position, contrasting with older models and the guys have a decent seat to pilot safely. Both crafts look equal with the obvious difference of the color! 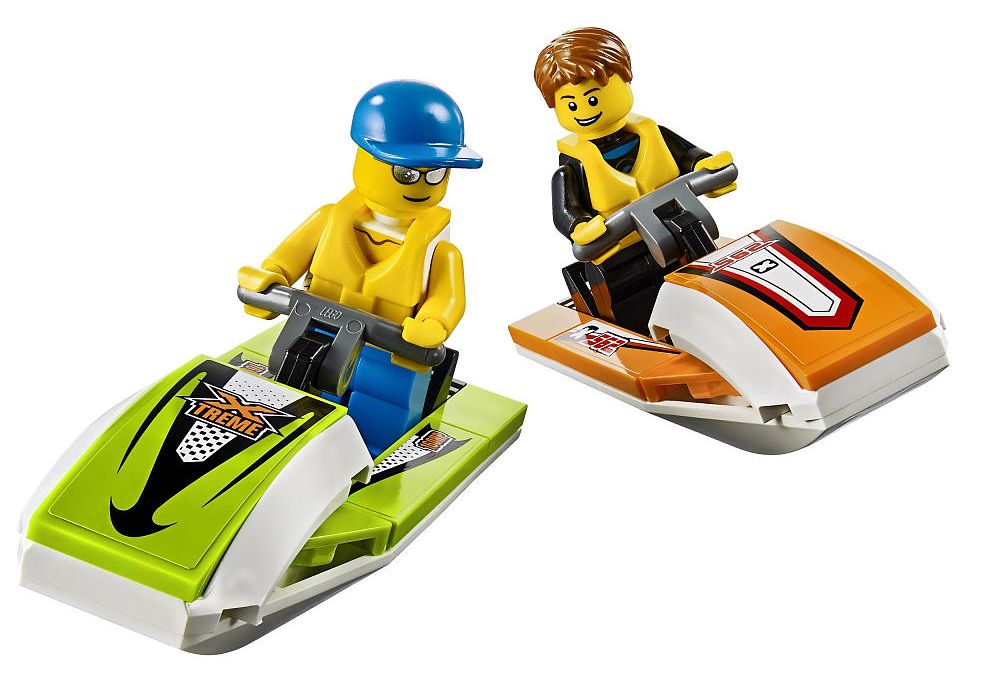 Overall this looks the typical set that will cause different sensations. If you have already some city models than you probably think that this one is a bit repetitive, but if you don’t I guess that you will surely want to buy it because the three machines look really appellative! Enjoy the gallery!