The last city set of the next 2014 wave has finally appeared. Its name was already known for quite some time but the images were only unveiled now by Toysrus online store. The new Monster Truck has only seventy eight pieces and features a small green vehicle and a mini-figure that is obviously its pilot.

If you were thinking about a big truck with XXL wheels, forget it! The little truck is really very cute but basically is just an ordinary city vehicle with raised suspension, some nice stickers and an aileron at the back, quite similar for instance to the one present in the monster truck transporter (60027).

The cockpit looks really small as well as the windshield, most of all thanks to the high hood at the front and to the fact that there are no side doors, which is normal, after all we’re talking about a racing car who is supposed to provide the best safety to the pilot. At the back the aileron can assume multiple positions thanks to the two clips that hold the green bar.

The suspensions are definitely the best part of the vehicle. Not only because is what distinguishes it from most of the others but also because they give the truck a very off road look. And as you can see there isn’t much stuff complicated in this part, just a couple of single yellow studs and some grey pieces above the chassis and it’s done! 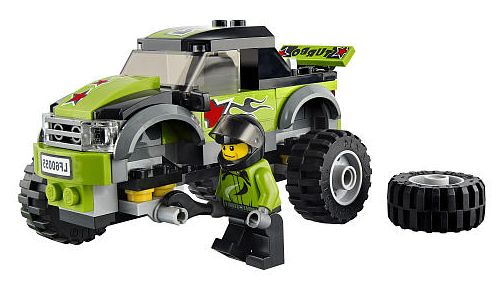 The pilot is a usual city guy with the particularity of having a suite with the some color of the car! If we think that this is not an ordinary vehicle and it will only cost around the ten bucks (perhaps a little less), I guess that we have here another 2014 deal. Please have a look at the additional pictures.